BOOKS THAT REFLECT ON AMERICA

As we head into July 4th, here are half a dozen recently published books you might enjoy as you reflect on this moment in America. Each book offers a unique lens and message: from being introspective and nostalgic to alarming, thrilling, and even hopeful. Take your pick!

Our Towns: A 100,000-Mile Journey into the Heart of America written by James Fallows and Deborah Fallows is true to its title. For five years, the authors travelled across America visiting dozens of towns, meeting everyone from civic leaders to workers, immigrants, educators, artists, and entrepreneurs in order to take the pulse of the country. That journey produced a vivid portrait of an America that is complex and contradictory, one that is in the midst of civic and economic reinvention.

The Soul of America by Pulitzer Prize-winning journalist Jon Meacham looks at this present moment in American politics and life by looking back at the critical times in our history when hope overcame division and fear: when presidents and citizens came together to fight the forces of anger, intolerance, and extremism. Meacham reminds us that our current climate of partisan fury is not new as we continue to battle for our better angels. 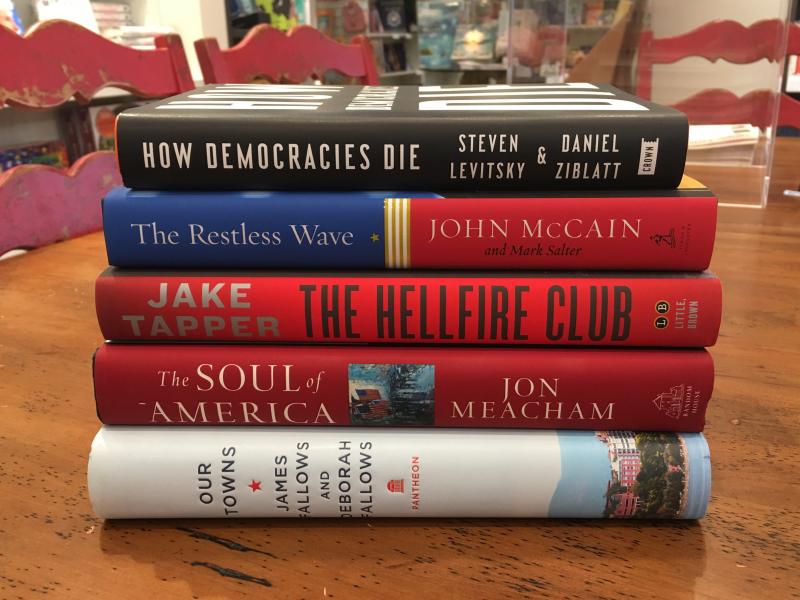 Hellfire Club by CNN’s Jake Tapper is a fictional political thriller set in the McCarthy era of 1950’s D.C.  It is the July selection for Gramercy Book Club on July 24th, to be facilitated by longtime Ohio State political science scholar and frequent political commentator Paul Beck. The book’s intrigue revolves around a secret society and a young Congressman in its grip.

The Restless Wave: Good Times, Just Causes, Great Fights, and other Appreciations is John McCain’s memoir that looks back with appreciation at his years in the Senate, his 2008 presidential campaign, and his crusade on behalf of democracy and human rights in Eastern Europe and the Middle East. He makes an impassioned case for democratic intentionalism and bipartisanship, reflecting on his satisfying work of public service with Senator Edward Kennedy. McCain offers a positive vision that looks beyond the Trump presidency.

How Democracies Die was written by Steven Levitsky and Daniel Ziblatt, professors of government at Harvard who have spent more than twenty years studying the breakdown of democracies in Europe and Latin America. Many ask today, “Is our democracy in danger?” This book reveals how the actions of elected leaders around the world have paved the road to democratic failure. The authors’ conclusion is that the breakdown to democracy happens as a slow, gradual erosion of long-standing norms.

Finally, Dan Rather’s What Unites Us: Reflections on Patriotism looks at what it means to be an American at a moment of crisis over our national identity. With this collection of original essays, his voice of reason reminds us of the principles upon which the United States was founded. Rather looks at the freedoms that define us, from the vote to the press; the values that have transformed us, from empathy to inclusion to service; the institutions that sustain us, such as public education; and the traits that helped form our young country, such as the audacity to take on daunting challenges in science and medicine. And he brings to bear his decades of experience on the frontlines of the world's biggest stories. As a living witness to historical change, he offers up an intimate view of history, tracing where we have been in order to help us chart a way forward and heal our bitter divisions. With a fundamental sense of hope, What Unites Us is the book to inspire conversation and listening, and to remind us all how we are, finally, one. Dan Rather will be the featured speaker on July 25that Villa Milano, sponsored by Friends Foundation of Worthington Libraries, Columbus Metropolitan Club, and Gramercy Books.

Our Towns: A 100,000-Mile Journey into the Heart of America (Hardcover)

By James Fallows, Deborah Fallows
Email or call for price

The Soul of America: The Battle for Our Better Angels (Hardcover)

By Jake Tapper
Email or call for price

By Steven Levitsky, Daniel Ziblatt
Email or call for price

What Unites Us: Reflections on Patriotism (Hardcover)