Merriam Webster’s definition for inspiration is as follows: “the action or power of moving intellect or emotions.” That describes what happens inside the walls of an independent bookstore each and every day. It also describes what we mean at Gramercy Books when we say: “find inspiration here.”

But what exactly is inspiration? We may say we are inspired when our senses are stimulated, when time seems to disappear, when we have the feeling of awe, or an awareness of something beyond ourselves. There’s something magical about inspiration in the way we may feel transported to another place, perhaps by a power greater than us. Inspiration could be thought of as a new way of seeing the world.

There’s no better place to experience inspiration than in books, particularly several we are featuring in February. If you’re looking for genuine inspiration, Barking to the Choir: The Power of Radical Kinship, by Gregory Boyle, is a must read. The book offers a glimpse of a world defined by more compassion and fewer barriers—and it comes from Boyle’s three decades of working with gang members in his native Los Angeles. A Jesuit priest, Boyle is founder of Homeboy Industries, the largest gang intervention, rehabilitation, and re-entry program in the world. Inside these pages, he shares what this experience taught him and what he hopes it can teach readers.

In a nation deeply divided and plagued by poverty and violence, Barking to the Choir offers a snapshot into the challenges and joys of life on the margins. Boyle suggests the ultimate measure of health in any community might rest in our ability “to stand in awe at what folks have to carry rather than in judgment at how they carry it.” In this important book, we meet Sergio, arrested at nine, in a gang by twelve, and serving time shortly thereafter. Sergio now works with the substance-abuse team at Homeboy to help others find sobriety. There’s Jamal, abandoned by his family when he tried to attend school at age seven, who gradually finds forgive­ness for his schizophrenic mother. New father Cuco, who never knew his own dad, thinks of a daily adventure on which to take his four-year-old son. These former gang members uplift the soul and reveal how bright life can be when filled with unconditional love and kindness.

Greg Boyle will be discussing Barking to the Choir at Gramercy Books on February 7th at 7 pm. Registration for this free event is now closed, but if you’d like to put your name on a waiting list, please call the store at 614.867.5515. 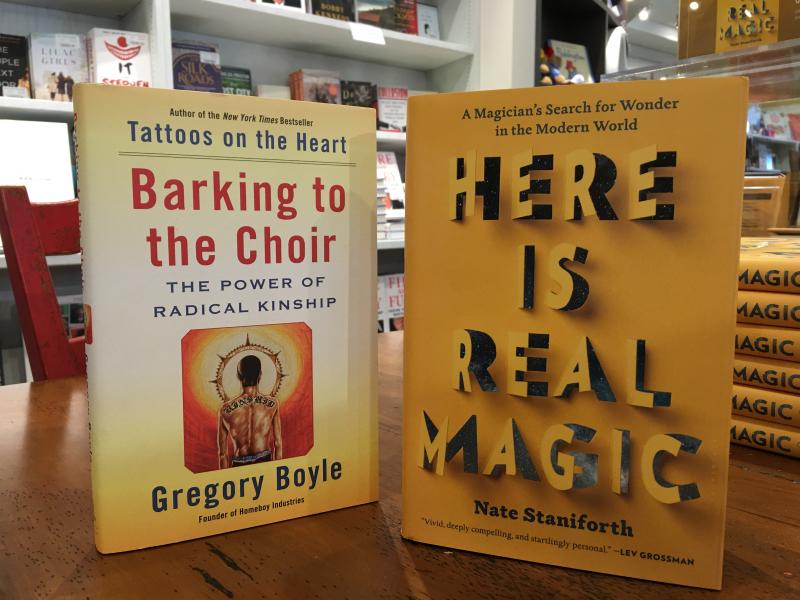 Similar to the pedagogy of Homeboy Industries, that asks us to jostle our own complacency as it invites us to find kinship with one another, is the language of magic. Harry Houdini believed that the purpose of magic was not just to amaze and amuse, but to awaken hope that the impossible was indeed possible. Magic is about wonder; it’s about inspiration. An extraordinary memoir about finding wonder in everyday life, comes from magician Nate Staniforth in his memoir: Here Is Real Magic: A Magician’s Search for Wonder in the Modern World.

Nate Staniforth spent most of his life and all of his professional career trying to understand wonder--what it is, where to find it, and how to share it with others. He became a magician because he learned at a young age that magic tricks don't have to be frivolous. Magic doesn't have to be about sequins and smoke machines—rather, it can create a moment of genuine astonishment.

But after years on the road as a professional magician, crisscrossing the country and performing four or five nights a week, every week, Nate became disillusioned, burned out, and ready to quit. So, he went to India in search of magic. Here Is Real Magic follows Staniforth's evolution from an obsessed young magician to a broken wanderer and back again. It tells the story of his rediscovery of astonishment and the importance of wonder in everyday life during his trip to the slums of India, where he infiltrated a three-thousand-year-old clan of street magicians. Here Is Real Magic is a call to all of us—to welcome awe back into our lives, to marvel in the everyday, and to seek magic all around us.

That, too, is inspiration.

Nate Staniforth will be hosted by Gramercy Books at an exclusive central Ohio event being held at the Drexel Theatre on February 21st at 7 pm. Tickets are $10 and can be applied toward the purchase of Staniforth’s book.

When the private experience of reading becomes something shared, connecting one reader to another—which is what happens at our book discussions and author events—that, also, is inspiration.

I invite you to find inspiration here, at Gramercy Books!

Barking to the Choir: The Power of Radical Kinship (Hardcover)

Here Is Real Magic: A Magician's Search for Wonder in the Modern World (Hardcover)