On September 5th, Gramercy Books brings Jacqueline Woodson, National Ambassador for Young People’s Literature, back to the Columbus area where she was born in 1963. Woodson is the author of more than thirty award-winning books for young adults, middle graders and children. Her visit celebrates the launch of two new books for young readers: Harbor Me for middle grade readers and The Day You Begin, a picture book.

Woodson’s reputation in the world of young adult and children’s literature precedes her as her work has received wide acclaim—four Newbery Honor awards, a National Book Award, two Coretta Scott King Awards, a NAACP award for Outstanding Literary Work, and the Margaret A. Edwards Award for Lifetime Achievement. In 2015, she was named the Young People’s Poet Laureate by the Poetry Foundation. Her adult novel, Another Brooklyn, a finalist for the National Book Award, made clear that Woodson is a writer whose work has the power to move readers of all ages.

Awards and accolades aside, Woodson’s stories are relevant, personal, and thought–provoking whether she writes fiction, nonfiction, poetry or short stories. Regardless of the target audience, her books push boundaries and tackle serious subjects like teenage pregnancy, foster care, urban poverty and drugs. She often does this with sympathetic characters put into realistic situations. Known for the detailed physical landscapes in each of her books, she explores issues of gender, class and race as well as family and history. She places boundaries everywhere—social, economic, physical, sexual, racial—then has her characters break through these physical and psychological confines to create a strong and emotional story. She is also known for her optimism. She has said that she dislikes books that do not offer hope. 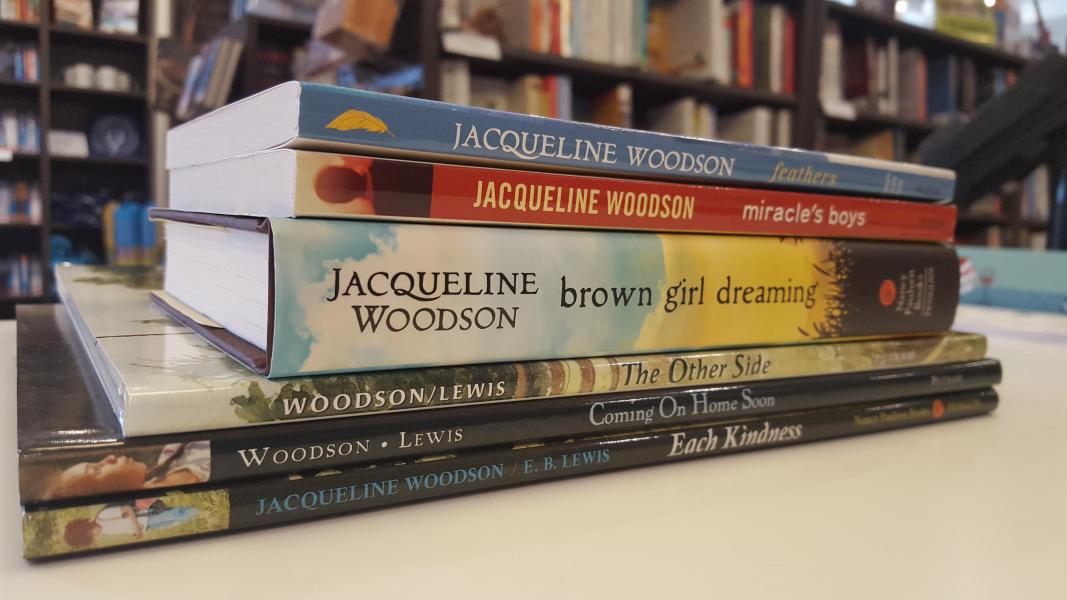 Below are just some of Woodson’s lauded body of work:

The Other Side is a poetic look at race through two young girls, one black and one white, who sit on either side of the fence that separates their worlds.(Picture book)

Coming on Home Soon explores both race and gender within the historical context of World War II. (Picture book)

Each Kindness tells the story of a young girl who is ostracized and rejected because she is different. Eventually, she plays alone, and then stops coming to school altogether. When the teacher gives a lesson about how even small acts of kindness can change the world, those who had shunned the girl are stung by the lost opportunity for friendship. (Picture book)

The Day You Begin is about finding the courage to connect with others, and was inspired by a poem in Brown Girl Dreaming that drew on Woodson’s great-grandfather’s childhood experience as the only black student in an all-white school. (Picture book)

Feathers is a children’s historical novel about a sixth-grade girl named Frannie growing up in the ‘70s. One day an unexpected new student causes much chaos to the class because he is the only white boy in the whole school. The book grapples with concepts such as religion, race, hope, and understanding and examines what it was like to grow up right after segregation had been outlawed, how all people are equal, and that hope is everywhere. The book was a Newbery Honor winner in 2008.(Middle grade)

Brown Girl Dreaming is a memoir told in verse that discusses Woodson’s childhood as an African American growing up in the 1960s in South Carolina and New York. It was awarded the National Book Award for Young People's Literature, the Coretta Scott King Book Award, and an NAACP Image Award for outstanding literary work. (Middle grade)

Harbor Me introduces a group of classmates who form a bond as they discuss timely topics — everything from their fears of deportation or being racially profiled to being judged by their accents, skin color, or parental heritage. (Middle grade)

The Day You Begin (Hardcover)

Another Brooklyn: A Novel (Hardcover)

The Other Side (Hardcover)