I have the original hardcover edition of Kazuo Ishiguro’s Never Let Me Go. The front cover shows a blond-haired girl looking down, almost behind her, so you can’t clearly see her face. She’s wearing a blood orange blouse and a long black skirt, sitting in a garden surrounded by green flora. It’s actually not a cover that would jump out at me at a bookshop and when it came out in 2005, I’d never heard of its author even though he’d already written five books, the first in 1982. My father, always a voracious reader, gave me his copy. “You should read this,” he said. “It’s a very good book.” So I did. And since that time, Never Let Me Go remains at the top of my list of all-time favorites. 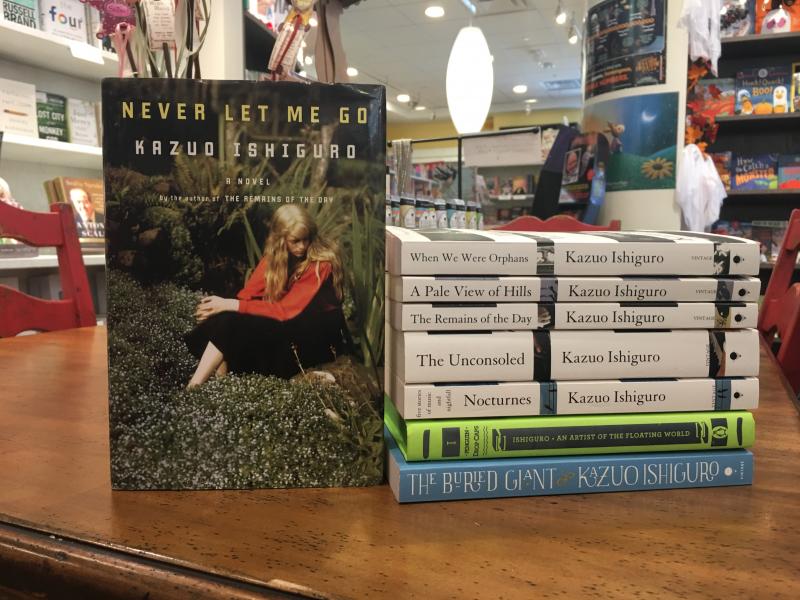 Then, in 2013, I was struggling with the revision of my debut novel, Tasa’s Song and attended a Kenyon Review novel revision workshop. As I considered the role of backstory in the telling of my historical narrative, a writer in my group suggested I read The Remains of the Day. Here’s a novel told entirely in backstory: a butler serving an English lord in the years leading up to World War II, embarks on a six-day country drive, during which he looks back over his career to reassure himself that he has served humanity by serving “a great gentleman.” It is an extraordinary novel, the voice of the butler pitch perfect. I decided to do some research on Ishiguro at that time and found a 2008 Paris Review interview where I learned that his choice of narrator and setting is deliberate. The author suggested choosing the setting with great care because “with a setting comes all kinds of emotional and historical reverberations.” As he contemplated character for what became The Remains of the Day, Ishiguro said he became obsessed with the butler as a metaphor. As a metaphor for what, the interviewer understandably asked.  “. . . a certain kind of emotional frostiness. The English butler has to be terribly reserved and not have any personal reaction to anything that happens around him,” Ishiguro answered. “It seemed to be a good way of getting into not just Englishness but the universal part of us that is afraid of getting involved emotionally.”

Here I must add, for those unfamiliar with Ishiguro’s background, that the author was born in Nagasaki, Japan in 1954 but has lived in England since his family moved to the small town of Guildford in southern England when he was five. The Remains of the Day won the Man Booker Prize for Fiction the year Knopf released it, in 1989, and four years later it was adapted into an Academy Award-nominated film starring Anthony Hopkins and Emma Thompson. Ishiguro had written two previous novels, A Pale View of Hills (1982) and An Artist of the Floating World (1986), both deeply Japanese in their themes—secrecy, regret, hypocrisy, and loss—also found in the 20th century English novel. So it is understandable that his third novel would be deeply English.

Ishiguro has written a total of eight books, as well as screenplays for both film and television, and a handful of songs for American jazz singer Stacey Kent. Their collaborative CD, Breakfast on the Morning Tram, was a best-selling jazz album in France. But Ishiguro’s writing came after he realized he wasn’t going to make it as a musician. (He still plays the guitar.) Back in the 2008 Paris Review interview, he spoke about Bob Dylan as a great lyricist and his discovery of Leonard Cohen who, he felt, had a literary approach to lyrics. “I liked the idea that a musician could be utterly self-sufficient. You write the songs yourself, sing them yourself, orchestrate them yourself. I found this appealing and I began to write songs.”

Perhaps inevitably, Ishiguro’s oeuvre is known for its lyrical prose. His style is accessible and widely read, the rare writer beloved by critics and scholars and is commercially successful. At the end of The Remains of the Day, Mr. Stevens, the butler, visits a special seaside town recommended to him by a travel book and, particularly, its pier “in the evening when it becomes lit up with bulbs of various colours.” So he sits on a bench and awaits the event with a good view of the sun setting over the sea after a “splendid day,” the pier bustling with people. “The drumming of numerous footsteps upon these boards continues without interruption,” Ishiguro writes, reminding me of the Atlantic City boardwalk but, of course, this setting was the English seaside. As the pier lights switch on, the sky a pale red, the crowd cheering to greet the event, a man sitting beside Stevens on the bench claims that, for a great many people the evening was the best part of the day, “the part they most looked forward to.” Stevens thinks the man had been speaking figuratively, but realizes “his words borne out so immediately at the literal level.” And that is where the meaning of the novel is revealed: Stevens recognizes that he should cease looking back so much and “try to make the best of what remains of my day. After all, what can we ever gain in forever looking back and blaming ourselves if our lives have not turned out quite as we might have wished?”

Ishiguro discovered literature as a young boy when he uncovered Sherlock Holmes stories in the local library. His subsequent journey as a writer has been nothing short of adventurous revealing extraordinary range, playing with genres like detective fiction (When We Were Orphans), science fiction (Never Let Me Go) and fantasy (The Buried Giant). He writes with restraint, tackling big themes like the fallibility of memory, mortality, war and love.

Consider my favorite, Never Let Me Go, a book I never would have picked up without my father’s recommendation because of its dystopian theme. The fictional children we first meet—Kathy H., Ruth and Tommy—are frolicking at their private English boarding school called Hailsham in the English countryside. In Ishiguro’s reimagined world, we quickly learn they are clones created by the state to provide healthy organs for normal British citizens. Once they’ve done their duty in early adulthood, they will die. In Ishiguro’s almost stoic prose, the horror of their plight resonates within us because it mirrors our own plight. He creates three very real characters who suddenly realize their life spans are limited and what they care most about is each other. Through them we see what it means to be a human being and we are reminded that life is precious.

Following the October 5 announcement that Kazuo Ishiguro was named winner of the 2017 Nobel Prize in Literature, his publisher, Knopf, went back to press for a total of 200,000 new copies of some of his best and lesser known titles. Gramercy Books put in an order that very day and now has copies of his full body of work in the store. In its citation accompanying the announcement of the Nobel award, the Swedish Academy recognized Ishiguro as an author “who, in novels of great emotional force, has uncovered the abyss beneath our illusory sense of connection with the world.” I applaud the Academy’s choice.

The Remains of the Day (Vintage International) (Paperback)

An Artist of the Floating World (Vintage International) (Paperback)

When We Were Orphans: A Novel (Vintage International) (Paperback)