By the time you read this, I will be on my way to Paris with my husband to celebrate a milestone anniversary. I haven’t been to Paris since college and my husband has never been there, so I’ve been gathering all kinds of information. I’m learning about the geography of the city and how Paris is broken into arrondissements. I have compiled my “must see” list that, of course, includes the famous Paris bookstore, Shakespeare and Company, located in the 5tharrondissement. It’s a purveyor of new and second-hand books, an antiquarian bookseller, and a free reading library open to the public. Additionally, the shop houses aspiring writers and artists in exchange for their helping out around the bookstore. Since the shop opened in 1951, more than 30,000 people have slept in the beds found tucked between bookshelves. The shop's motto, "Be Not Inhospitable to Strangers Lest They Be Angels in Disguise," is written above the entrance to the reading library.

Other Paris destinations include several museums—The Louvre, Picasso Museum, and Musee D’Orsay—along with March Bastille, one of the largest Parisian markets. We also plan to walk around Le Marais neighborhood, which has been compared to the West Village in New York as it is the small and approachable Paris of the past. My list also includes a leisurely walk along the Seine, people watching at sidewalk cafes, taking in the panoramic views of Paris from Notre Dame, and spending an afternoon at Monet’s House at Giverny. I have a list of more restaurant names than we have available mealtimes.

That said, I also began thinking about the range of novels I’ve read that are set in Paris, from a children’s favorite, Madeline, to a classic, James Baldwin’s Giovanni’s Room, to a few I’ve read over the past few years. I’ll start with the one about a bookshop! 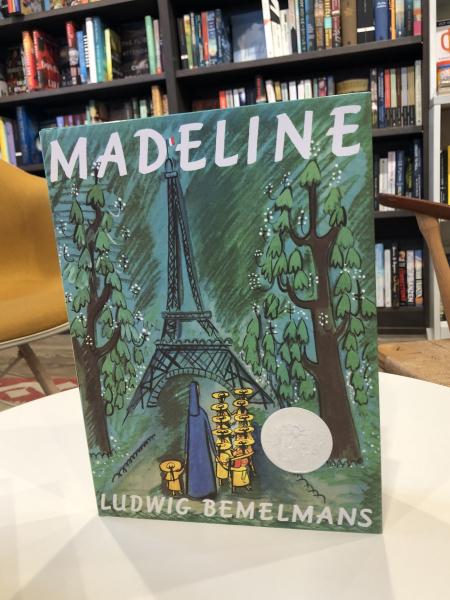 The Little Paris Bookshop (Crown, 2015) is Nina George’s warm, charming, sometimes sentimental tale, of love, loss and the power of reading. Monsieur Perdue is devoted to his floating bookstore, the Literary Apothecary, docked in a barge on the Seine where he prescribes specific books to mend broken hearts and souls. The only person he can’t heal through literature is himself, still haunted as he is by heartbreak after his great love left him with only a letter that he never opened. After Perdue finally reads the letter, he draws his anchor and departs on a mission to the south of France, hoping to make peace with his loss. Joined by a bestselling but blocked author and a lovelorn Italian chef, Perdu travels along the country’s rivers, dispensing his wisdom and his books, showing that the literary world can take the human soul on a journey to heal itself.

The Paris Wife (2011, Harper Collins) captures the love affair between Ernest Hemingway and his first wife, Hadley Richardson. Following a whirlwind courtship and wedding, the couple set sail for Paris and join the bright jazzed heat of Paris in the 1920s. Theirs is a hard-drinking, fast-living life that includes Gertrude Stein, Ezra Pound and the Fitzgeralds. As imagined by author Paula McLain, the story is as much about people and inspiration as it is about ambition and betrayal, set amid this unique intersection of time and place.

The Paris Architect (2013, Sourcebooks Landmark) is an expertly plotted World War II thriller about an ordinary, but opportunistic, man's unexpected and reluctant descent into heroism. Like most gentiles in Nazi-occupied Paris, architect Lucien Bernard has little empathy for the Jews. So when a wealthy industrialist offers him a large sum of money to devise secret hiding places for Jews, Lucien struggles with the choice of risking his life for a cause he doesn’t really believe in. Ultimately, he can’t resist the challenge and the income he needs, and begins designing expertly concealed and inventive hiding spaces—behind a painting, within an ornamental column, even inside a kitchen floor drain—detecting possibilities invisible to the average eye. But when one of his clever hiding spaces fails horribly and the immense suffering of Jews becomes incredibly personal, he can no longer deny reality.In his debut fiction, author Charles Belfoure uses his architectural expertise as he skillfully builds a tale with high tension and deep conflict.

Goodbye, Paris (2018, Simon & Schuster) is a charming story by author Anstey Harris about a woman named Grace Atherton, a cellist and owner of a violin shop in a quiet town in England, who has been for years in a romantic, long-distance affair with a married man, David, in Paris. After David saves the life of a woman in the Paris Metro, and his resulting fame reveals this relationship is not the narrative she’s been telling herself (that he will leave his loveless marriage as soon as his kids are grown), Grace’s dreams of the future are destroyed. But she collects the pieces of her shattered life, along with the dear friendship of a vivacious elderly violinist who frequents her shop and her talented but angst-ridden teenage store clerk, and makes it whole again with the reader rooting for her throughout. 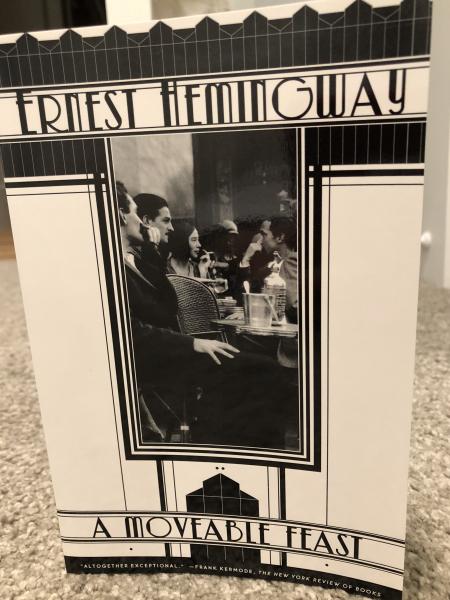 A Moveable Feast, Ernest Hemingway’s classic memoir of Paris in the 1920s and published posthumously in 1964, is a literary feast, brilliantly evoking the exhilarated mood of Paris after the first world war. One of Hemingway’s most beloved works, the book is filled with irreverent portraits of other expatriate luminaries such as F. Scott Fitzgerald and Gertrude Stein; tender memories of his first wife, Hadley; and insightful recollections of his own early experiments with his craft.

Giovanni’s Room is a 1956 novel by James Baldwin, his second, set in the 1950s Paris of American expatriates, liaisons, and violence. There, a young man finds himself caught between desire and conventional morality. The book focuses on the events in the life of an American man named David living in Paris and his feelings and frustrations with his relationships with other men in his life, particularly an Italian bartender named Giovanni whom he meets at a Parisian bar. This now-classic narrative delves into the mystery of loving and creates a moving, highly controversial story of death and passion that reveals the unspoken complexities of the human heart.

Madeline is the first in a children’s series of books written in 1939 by Ludwig Bemelmans and is considered one of the modern classics in children’s literature. The story is set in a Catholic boarding school in Paris. The book’s memorable cover portrays a sketch of the Eiffel Tower, introducing generations of children to this Paris landmark. The opening rhyming sentences were repeated at the start of the subsequent books in the series:

“In an old house in Paris

that was covered with vines

the smallest one was Madeline.”

Madeline is just seven and a redhead. She is also the bravest and most daring, sometimes troublesome for teacher, Miss Clavel. Nothing frightens Madeline—not tigers, not even mice. In this story, after being rushed to the hospital for a burst appendix, and after Miss Clavel and her classmates visit her, all the other girls wake up wailing and demanding to have their appendix out, too. Madeline is an endearing character, a courageous heroine, the book is cheerful, and the whimsical drawings of Paris enhance the telling of this award-winning tale.

The Paris Wife: A Novel (Paperback)