Why A Music Section at Gramercy Books?

My love of music began at an early age. My father, who was born in Vienna, often listened to the melodies of his favorite Eastern European composers on the radio during weekends in my childhood home—Johann Strauss Jr., Bach, Beethoven, Brahms, Mozart, Tchaikovsky. Decades later, I would hear the music playing in his apartment every time I came to visit. In my debut novel, Tasa’s Song, my protagonist is a violin prodigy in eastern Poland during WWII and she plays all the music adored by my father.

Dad was a voracious reader as well. He recommended that I read what became one of my favorite novels, Never Let me Go by Kazuo Ishiguro. And knowing his love of classical music, I would recommend fiction where this musical genre played a role. He welcomed my suggestion last summer of Lauren Belfer’s And After the Fire, a story inspired by historical events about two women, one European and one American, and the mysterious choral masterpiece by Johann Sebastian Bach that changes both their lives.

Some years earlier, knowing his enjoyment of opera, I told him about Bel Canto, by Ann Patchett, a story about a world-renowned soprano taken hostage along with a cast of international diplomats in a Third World country. Joined by no common language but music, the 58 international hostages and their 18 captors forge unexpected bonds. 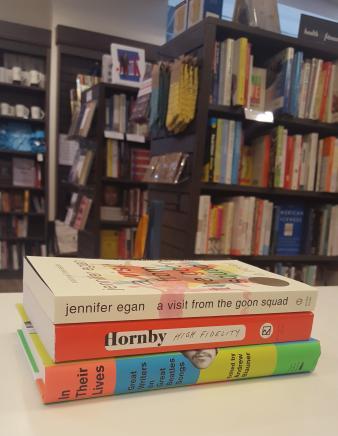 When I decided to open a bookstore, I wanted to have a well-curated music section. I wanted to include novels where any kind of music is an integral part of the story, like those I mentioned above—and like Jennifer Egan’s A Visit from the Goon Squad, Tom Perotta’s The Wishbones, Michael Chabon’s Telegraph Avenue, and Nick Hornby’s High Fidelity. But also books about music, memoirs by musicians, and books about songwriting.

After all, music has had a great impact on our cultural consciousness. Look at the Beatles influence. An anthology of essays just came out in May, In Their Lives: Great Writers on Great Beatles Songs, featuring a chorus of twenty-nine authors and musicians singing the praises of their favorite Beatles song (from Roz Chast on “She Loves You” to Jane Smiley on “I Want to Hold Your Hand”). Edited by Andrew Blauner, the essays highlight both the Beatles’ evolution as well as the span of generations their music affected. From Beatlemaniacs who grew up listening to the iconic albums on vinyl to new fans who download the songs on iTunes, each contributor explores a poignant intersection between Beatles history and personal history.

And, now, some ponder whether music, or specifically song lyrics, can be literature. When Bob Dylan was selected to receive the Nobel Prize for Literature last October, many wrestled with that question. In his recent Nobel lecture, Dylan admitted to wondering as well. From the musical inspiration of Buddy Holly, Leadbelly and early folk music, Dylan admitted to picking up the vernacular. He learned those finer details the way all writers study those they admire and borrow from them. “When I started writing my songs, the folk lingo was the only vocabulary that I knew, and I used it.” 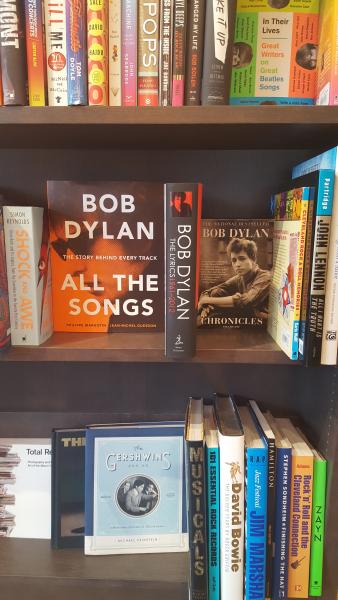 But Dylan also had an informed view of the world through reading Don Quixote, Ivanhoe, Robinson Crusoe, Gulliver’s Travels, and A Tale of Two Cities. He took this understanding of human nature with him when he started composing lyrics. And the themes from these books found their way into many of his songs, intentionally or unconsciously. “I wanted to write songs unlike anything anybody every heard, and these themes were fundamental.” The three books of greatest influence—books he could relate to his own life or that of the world around him—were Moby Dick, All Quiet on the Western Front and The Odyssey.

Did Dylan answer if song lyrics are literature? Not exactly. He says, “If a song moves, you, that’s all that’s important.” In the lecture, he asks people to listen to songs because “songs are unlike literature. They're meant to be sung, not read.”

But he concludes his commentary with a quote from Homer: “Sing in me, oh Muse, and through me tell the story.” Dylan, here, is confirming that a songwriter is a storyteller.

On July 19th at 7pm, Gramercy Books is thrilled to host two award-winning songwriters—Eric Gnezda and Keith Larsen—for one great night of songs and stories. Songwriter and memoirist Eric Gnezda is creator and host of the American Public Television series, Songs at the Center, and a regular performer at Nashville’s famous venue for songwriters, The Bluebird Café. Eric’s songs often share his experience growing up with a disabled dad and gives tribute to those who had an early influence on his life. Keith Larsen, a finalist in the Country Music Television/NSAI Song Contest, is a frequent participant in Nashville songwriter rounds and writing sessions. Drawing from his years as a firefighter, Keith merges straightforward vocals with lyrics that resonate with simplicity, honesty and humility.

While you can find books in every genre for all ages, and attend events featuring authors and poets and culinary experts, at Gramercy Books you can also find songwriting and songwriters ready to tell you a story. Join us on July 19th!

About the author: I began my career as a magazine writer and correspondent for regional and national publications and am now an assistant editor for Narrative, an online literary magazine. My debut novel, Tasa’s Song, was inspired by my mother’s early life in eastern Poland during the Second World War. It won a Bronze Medal for Historical Fiction from the Independent Publisher Award Program and is a 2016 Foreword INDIES Award Finalist. I am also the proud owner of Gramercy Books, central Ohio’s newest indie bookstore!

A Visit from the Goon Squad (Hardcover)

In Their Lives: Great Writers on Great Beatles Songs (Hardcover)