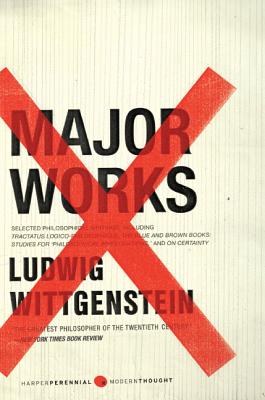 The finest introduction to “the greatest philosopher of the 20th century” (New York Times Book Review), including the complete text of the Tractatus, The Blue and Brown Books, and On Certainty

Major Works is the first single-volume English anthology of  Ludwig Wittgenstein's important philosophical writings. Featuring the complete texts of Tractatus Logico-Philosophicus, The Blue and Brown Books: Studies for 'Philosophical Investigations,' and On Certainty, this new collection selects from the early, middle, and later career of this revolutionary thinker, widely recognized as one of the most profound minds of all time. Wittgenstein contributed several groundbreaking ideas to philosophy, primarily in the foundations of logic, the philosophy of mathematics, the philosophy of language, and the philosophy of mind.

“The greatest philosopher of the [20th] century . . . Wittgenstein had an impact of extraordinary proportions. — Colin McGinn, The New Republic

Ludwig Wittgenstein (1889-1951) was born in Austria and studied at Cambridge under Bertrand Russell. He volunteered to serve in the Austrian army at the outbreak of World War I, and in 1918 was captured and sent to a prison camp in Italy, where he finished his masterpiece, Tractatus Logico-Philosophicus, one of the most important philosophical works of all time. After the war Wittgenstein eventually returned to Cambridge to teach.

“The greatest philosopher of the 20th century. . . . Wittgenstein’s genius is patent to any philosopher who will take the time and trouble to come to grips with his profound but difficult writings.” — New York Times Book Review

“A great mind who refined thought. . . . Ludwig Wittgenstein exercises a fascinating that no other 20th century philosopher--and few philosophers of any era--can match." — The Times (London)

“The greatest philosopher of the century . . . Wittgenstein had an impact of extraordinary proportions.” — Colin McGinn, The New Republic