The Family Gene: A Mission to Turn My Deadly Inheritance into a Hopeful Future (Paperback) 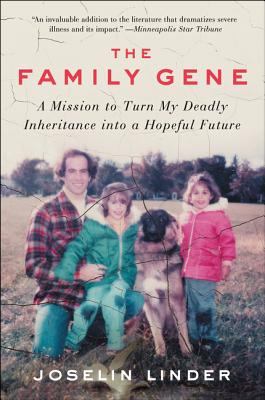 When Joselin Linder was in her twenties her legs suddenly started to swell. After years of misdiagnoses, doctors discovered a deadly blockage in her liver. Struggling to find  an explanation for her unusual condition, Joselin compared the medical chart of her father—who had died from a mysterious disease, ten years prior—with that of an uncle who had died under similarly strange circumstances. Delving further into the past, she discovered that her great-grandmother had displayed symptoms similar to hers before her death. Clearly, this was more than a fluke.

Setting out to build a more complete picture of the illness that haunted her family, Joselin approached Dr. Christine Seidman, the head of a group of world-class genetic researchers at Harvard Medical School, for help. Dr. Seidman had been working on her family’s case for twenty years and had finally confirmed that fourteen of Joselin’s relatives carried something called a private mutation—meaning that they were the first known people to experience the baffling symptoms of a brand new genetic mutation. Here, Joselin tells the story of their gene: the lives it claimed and the future of genomic medicine with the potential to save those that remain.

Digging into family records and medical history, conducting interviews with relatives and friends, and reflecting on her own experiences with the Harvard doctor, Joselin pieces together the lineage of this deadly gene to write a gripping and unforgettable exploration of family, history, and love. A compelling chronicle of survival and perseverance, The Family Gene is an important story of a young woman reckoning with her father’s death, her own mortality, and her ethical obligations to herself and those closest to her.

Joselin Linder is a regular contributor to the NEW YORK POST, whose work has also been featured on THIS AMERICAN LIFE, MORNING EDITION and LIFE OF THE LAW. She spoke at the TEDX GOWANUS event in Brooklyn in 2014, presenting for the first time on the subject of her family gene and the deadly illness to which it leads. Exclusive to just fourteen people, the story of the gene will be told in Linder’s new book, THE FAMILY GENE, coming out in 2017. She lives in Brooklyn with her husband and two dogs.

“Surprisingly buoyant . . . Describing how it feels to face the likelihood of a shortened life-including her conflicted desire to be a mother, despite the risks for any child-Linder reminds us that hope ‘isn’t the same thing as truth.’”
— New Yorker

“The Family Gene [is] both congenial and engaging, despite the long shadow of a broken gene.”
— New York Times Book Review

“Linder’s memoir is a personal tale of loss, illness, ethical dilemmas and emotional fallout. Some of the details are harrowing. But Linder tells her story in a smart, wry voice devoid of self-pity.”
— Chicago Tribune

“Crisply written, deeply informed. . . . Linder captures the dread and fatigue that accompanies such an odyssey. The Family Gene nails this truth in a clear, honest voice, an invaluable addition to the literature that dramatizes severe illness and its impact.”
— Minneapolis Star Tribune

“Linder not only knows how to tell a compelling story but also how to use numbers to good effect and how to spell out complicated concepts… Her brutal honesty contributes to the power of this thoroughly researched chronicle of the quest to conquer chromosomal abnormalities.”
— Booklist, Starred Review

“Moving and deft. . . . Linder expertly balances the serious and often tragic with an indefatigable charm and warmth. This book is a wonderful blend of reflections on coming of age, medicine, and what it means to live against all odds.”
— Publishers Weekly (Starred Review)

“Linder’s narrative is a combination of a fascinating medical detective story and an absorbing, powerfully written family chronicle. . . . She successfully integrates cutting-edge genetic research into her personal quest.
— Kirkus

“The science is enthralling, the narrative’s race-against-the-clock tension is nail-biting, but at its core, this book is about the remarkable bond of family—and curse and gift of inheritance.”
— Susannah Cahalan, author of Brain on Fire

“A riveting story of a family, a disease, genetics, and the eternal path of living and dying we all walk. Intimate and instructive, immeasurably wise, Linder’s big-hearted and intelligent story of her tenacious search for answers to her family’s singular disease will leave you breathless.”
— Jennifer Gilmore, author of Golden Country

“Linder’s writing is magnetic. She weaves this deeply personal story with fascinating scientific discoveries—somehow leaving us hopeful, heartbroken, and inspired all in the same breath.”
— Abby Sher, author of Amen, Amen, Amen

“The Family Gene is both a riveting medical mystery and a heart-wrenching family memoir. With compassion and humor, Joselin Linder keeps us turning the pages until we fully share her stunning insight: that genetics is equal parts science and love.”
— Andrew Blum, author of Tubes

“Three of the most powerful forces in life are family, love and science. Joselin Linder, through a combination of the fates, found herself in a position to tell a first-person tale of how those forces can intersect.”
— Bob Greene, author of Once Upon a Town: The Miracle of the North Platte Canteen

“This unique book is at once a compelling mystery, a moving personal story, and a fascinating exploration of cutting-edge science. Scary and hopeful, perceptive and empathetic, it will give you new perspective on your own life choices and those of the people you love.”
— Rachel Fershleiser, editor of Not Quite What I Was Planning