The Rainbow Comes and Goes: A Mother and Son On Life, Love, and Loss (Large Print / Paperback) 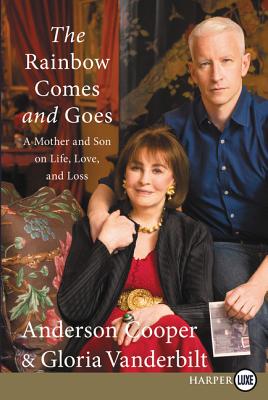 By Anderson Cooper, Gloria Vanderbilt
$29.99
Email or call for price.

A touching and intimate correspondence between Anderson Cooper and his mother, Gloria Vanderbilt, offering timeless wisdom and a revealing glimpse into their lives

Though Anderson Cooper has always considered himself close to his mother, his intensely busy career as a journalist for CNN and CBS affords him little time to spend with her. After she suffers a brief but serious illness at the age of ninety-one, they resolve to change their relationship by beginning a year-long conversation unlike any they had ever had before. The result is a correspondence of surprising honesty and depth in which they discuss their lives, the things that matter to them, and what they still want to learn about each other.

Both a son’s love letter to his mother and an unconventional mom’s life lessons for her grown son, The Rainbow Comes and Goes offers a rare window into their close relationship and fascinating life stories, including their tragedies and triumphs. In these often humorous and moving exchanges, they share their most private thoughts and the hard-earned truths they’ve learned along the way. In their words their distinctive personalities shine through—Anderson’s journalistic outlook on the world is a sharp contrast to his mother’s idealism and unwavering optimism.

An appealing memoir with inspirational advice, The Rainbow Comes and Goes is a beautiful and affectionate celebration of the universal bond between a parent and a child, and a thoughtful reflection on life, reminding us of the precious insight that remains to be shared, no matter our age.

Anderson Cooper joined CNN in 2001 and has anchored his own program, Anderson Cooper 360°, since March 2003. Cooper has won 18 Emmys and numerous other major journalism awards. He lives in New York with his son, Wyatt.

Gloria Vanderbilt is an American artist, writer, and designer. Her artwork can be found at GloriaVanderbiltfineart.com. She is the author of eight books and has been a regular contributor to the New York Times, Vanity Fair, and Elle. She lives in New York City.

“Intriguing… an ideal Mother’s/Father’s Day gift, with the opening, ‘Let’s get to know each other better’…Affectionate, heartfelt, inspirational, and sometimes hilarious, the book’s message is that it is never too late to cultivate a new relationship with your family and break down those walls of silence.” — Bay Area Reporter

“A beautiful book that will resonate for all generations, especially mothers and their sons . . . riveting, touching, dishy, funny, and surprising.” — Andy Cohen

“[A] touching story. . . . Through greater openness, Cooper and Vanderbilt achieve a new closeness, demonstrating in this intimate and lively read that it’s never too late to have a rich relationship with family.” — Publishers Weekly

“A layered mix of reminiscences, heart-rending revelations and apologia, all captured with unsparing candor. . . . Rainbows may in fact come and go, but this revealing take on the forces that shaped two dynamic lives promises to have real staying power.” — AARP Magazine

“This is a book like no other I have ever read…if any two people have lived through way more than their share of crises, singly and collectively, it is Anderson Cooper and Gloria Vanderbilt. Their brave engagement with what they confront so staunchly in this extraordinary dialogue leaves me quite simply awestruck.” — Washington Times

“Memoir readers (and Hollywood fans) will appreciate this book, especially those interested in relationships between mothers and sons. A perfect Mother’s Day read.” — Library Journal

“Entertaining and thoughtful moments exchanged between a mother and son who have spent much of their lives in the spotlight.” — Kirkus Reviews

“Through greater openness, Cooper and Vanderbilt achieve a new closeness, demonstrating in this intimate and lively read that it’s never too late to have a rich relationship with family.” — Publishers Weekly