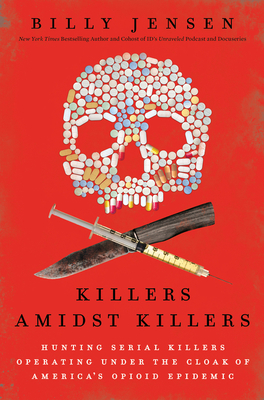 Bestselling author, co-host of the hit podcast and Discovery + docuseries Unraveled: Long Island Serial Killer, and true-crime investigative journalist Billy Jensen goes to Columbus, Ohio, where he examines the unsolved cases of eighteen dead and missing women, whom he suspects were the victims of serial killers on the loose and operating under cover of the opioid epidemic in America's heartland.

In Chase Darkness with Me, readers and listeners learned Billy Jensen’s journalist origin story, his struggles, his call to adventure, and his first successes in solving murders.

In Killers Amidst Killers, readers will ride shotgun with Jensen as he takes on serial killers who are walking among us and planning their next moves in real time. The facts are not in old police reports and faded photos. They unfold before our eyes on the page.

Our story begins in 2017, when two young women, best friends Danielle and Lindsey go missing in Columbus, Ohio, within weeks of each other, and their bodies are found soon thereafter.

As Jensen investigates Danielle and Lindsey’s cases, he comes across other missing and murdered women, and before long, he uncovers eighteen of them. All unsolved. And no one was talking about it.

These are not women who were raised in the street. They got hooked on pills. The pills were taken away. They get hooked on heroin. And when the money is gone, they have to sell themselves. It happens very quick.

Through his investigations and the help of experts, Jensen identifies serial killers in Cleveland and Columbus. Why there? Because it’s easy. Sharks go where the swimmers are. Serial killers go where the easy prey are: Ground zero of the opioid epidemic. The heart of America.

That is what happened to Danielle and Lindsey. But serial killers murdering sex workers in the 21st century will get 45 seconds on the local news, and page 3 in the local paper, and then can disappear in the wind.

Jensen hunts these predators to bring peace to the victims’ suffering families while putting a spotlight on a system that is leaving hundreds of thousands of bodies in its wake.

Billy Jensen has solved more than a half dozen homicides and helped find missing persons. Law enforcement agencies reach out to him to help in cases that have them stumped, using him as a “consulting detective.” The New York native has written crime stories for Rolling Stone, Los Angeles Magazine, Boston Magazine, and Miami New Times, was managing editor of the Long Island Press and a crime stringer for the New York Times. After his friend Michelle McNamara suddenly passed away, he and her researcher helped finish her book I’ll Be Gone in the Dark about the hunt for the Golden State Killer, which became a NYT #1 bestseller. Jensen’s own true crime memoir, Chase Darkness with Me, was a NYT bestseller. He was featured heavily in the HBO docuseries I’ll Be Gone in the Dark and produces and stars in the Discovery+ series Unraveled. He is co-host of the podcasts The First Degree and  Jensen and Holes: The Murder Squad.

“It’s a movie plot come to life…who doesn’t want to read that immediately?” — Karen Kilgariff, co-host of My Favorite Murder and co-author of #1 New York Times bestseller Stay Sexy and Don’t’Get Murdered, on Chase Darkness with Me

“Part memoir, part how-to guide, Chase Darkness With Me includes rules for responsible citizen detective work...Jensen has poured nearly all of his free time and energy over the past three years into crowd-sourcing criminal investigations...Even when he accumulated $20,000 in debt from promoting his posts, he’s never given up on a case.”  — Rolling Stone

“In this engrossing memoir, journalist Jensen takes the reader on his quest to hunt down killers using internet sleuthing and crowdsourcing...For fans of true crime, this is a fascinating story.”  — Publishers Weekly on Chase Darkness with Me

"Billy intertwines the devastating impact of poverty, the war on drugs and the opioid epidemic into an easily digestible yet disturbing peek behind the curtain of humanity’s dark side. This book is a must for understanding why crime prevails amongst our most vulnerable. Check it out and Hail Yourself!"
— Ben Kissel, co-host Last Podcast on the Left, author of New York Times bestseller of The Last Book on the Left

"Billy Jensen doesn't just write about a case, he writes about the human beings that often vanish inside of their own narrative. In Killers Amidst Killers we sit in the passenger seat as he brings eighteen murdered women back to life through their friends, family and their unique stories. I found myself stopping to catch my breath throughout. This book is elevated true crime and is a welcome breath of fresh air where victims are treated with love and care. Billy's investigatory skills are felt on every page, but his compassion comes through with every word." — Alaina Urquhart, author of The Butcher and The Wren and co-host of Morbid: A True Crime Podcast.