Boundless: The Rise, Fall, and Escape of Carlos Ghosn (Hardcover) 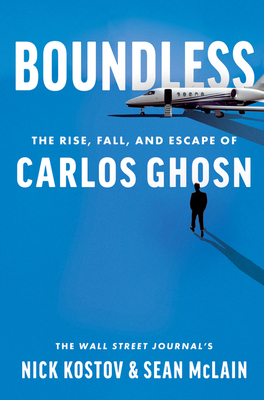 The unprecedented rise and catastrophic fall of one of the world’s most feared and admired business executives—Carlos Ghosn—a remarkable story of innovation, hubris, alleged crimes, and daring international escape, as chronicled by two Wall Street Journal reporters.

Carlos Ghosn always wanted more. Born in the Amazon, raised by a well-off—if scandalized—family in Beirut, and educated in Paris, Ghosn rose to prominence at Michelin in the United States, Renault in France, and Nissan in Japan. Along the way he earned monikers of Le Cost Killer, for his incisive business savvy, and Mr. 7-Eleven, for the hours he devoted to his work.

Initially Ghosn thrived, becoming a poster boy for globalization and multinational corporations. Employees believed him to be among the greatest business minds of his generation, and the press hailed him a financial genius. The trouble started when Ghosn began to believe them. His power rose in tandem with an increasing certainty that he was underpaid and undervalued at his multiple posts. Executives grew unhappy with Ghosn’s talk of a merger with Renault, calling his loyalty to Nissan into question. Resentments brewed, enough so that a group of Nissan executives set out to uncover the truth about the man who many throughout Nissan and Japan perceived as a savior. Eventually, Ghosn was accused of financial misconduct and arrested for a bevy of alleged crimes—all of which he vehemently denied.

Yet even as he insisted his financial transactions were above board, Ghosn was planning an astounding escape, one that would either smuggle him out of Tokyo and back to his ancestral homeland of Lebanon; or land him in a Japanese prison for life.

Drawing from intensive investigative reporting, and including never-before-seen insider details from key players in Ghosn’s life and the investigations into him, Nick Kostov and Sean McLain piece together this fallen icon’s life and actions across the globe. Their sensational globetrotting adventure reveals the complexity of a man who watched for decades as contemporaries with far less talent amassed far greater wealth, and who took drastic measures to ensure he would finally get his due.

Nick Kostov has worked for the Wall Street Journal since 2015, covering business and finance from Paris. During that time, he has broken news on some of the biggest corporate stories in Europe. A graduate of University College London, Kostov lives in Paris.

Sean McLain has led the Wall Street Journal’s coverage of Japan’s biggest car companies, including Toyota, Honda, and Nissan, since 2016. A graduate of St. John’s College in Annapolis, Maryland, he lives in Tokyo.

“The rise and fall of Carlos Ghosn is a modern-day Greek tragedy—the story of a brilliant and industrious man whose greed and hubris took him from the top of the global auto industry to Interpol’s most-wanted list. In their deeply reported book, Kostov and McLain tell this story with nuance and empathy. . . . A fascinating read.” — John Carreyrou, bestselling author of Bad Blood

“An explosive exposé of a disgraced automotive-industry titan…This exciting, vividly detailed book explores a variety of relevant topics, including globalization, international business ethics, and how excessive wealth and fame have the potential to corrupt even the shrewdest businessperson. First-rate reporting on corporate savvy and greed and the ultimate cinematic escape.” — Kirkus Reviews, STARRED review

“[BOUNDLESS is] a fascinating and fast-moving account of one of the auto industry's most successful executives, his alleged crimes, and his eventual escape from authorities…The minute I poked my nose into Nick Kostov and Sean McLain’s Boundless, I was hooked…Actions like [Carlos Ghosn’s] need to be exposed and examined. Nick Kostov and Sean McLain do an excellent job of that.” — Porchlight

“Kostov and McLain, both Wall Street Journal reporters, have unearthed lots of new details, and they tell that part of the story with all the verve and tension of a good spy novel.” — The Washington Post