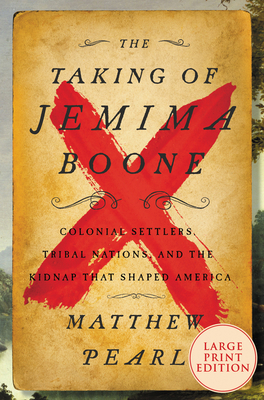 “A rousing tale of frontier daring and ingenuity, better than legend on every front.” — Pulitzer Prize–winning author Stacy Schiff

A Goodreads Most Anticipated Book

In his first work of narrative nonfiction, Matthew Pearl, bestselling author of acclaimed novel The Dante Club, explores the little-known true story of the kidnapping of legendary pioneer Daniel Boone’s daughter and the dramatic aftermath that rippled across the nation.

On a quiet midsummer day in 1776, weeks after the signing of the Declaration of Independence, thirteen-year-old Jemima Boone and her friends Betsy and Fanny Callaway disappear near the Kentucky settlement of Boonesboro, the echoes of their faraway screams lingering on the air.

A Cherokee-Shawnee raiding party has taken the girls as the latest salvo in the blood feud between American Indians and the colonial settlers who have decimated native lands and resources. Hanging Maw, the raiders’ leader, recognizes one of the captives as Jemima Boone, daughter of Kentucky's most influential pioneers, and realizes she could be a valuable pawn in the battle to drive the colonists out of the contested Kentucky territory for good.

With Daniel Boone and his posse in pursuit, Hanging Maw devises a plan that could ultimately bring greater peace both to the tribes and the colonists. But after the girls find clever ways to create a trail of clues, the raiding party is ambushed by Boone and the rescuers in a battle with reverberations that nobody could predict. As Matthew Pearl reveals, the exciting story of Jemima Boone’s kidnapping vividly illuminates the early days of America’s westward expansion, and the violent and tragic clashes across cultural lines that ensue.

In this enthralling narrative in the tradition of Candice Millard and David Grann, Matthew Pearl unearths a forgotten and dramatic series of events from early in the Revolutionary War that opens a window into America’s transition from colony to nation, with the heavy moral costs incurred amid shocking new alliances and betrayals.

Matthew Pearl’s novels have been international and New York Times bestsellers translated into more than 30 languages. His nonfiction writing has appeared in the New York Times, the Boston Globe, The Atavist Magazine, and Slate. The New York Daily News raves "if the past is indeed a foreign country, Matthew Pearl has your passport." Matthew has been chosen Best Author for Boston Magazine's Best of Boston and received the Massachusetts Book Award for Fiction. The Taking of Jemima Boone is his nonfiction debut.

“Not only did Matthew Pearl’s clear and vivid writing immediately sweep me up in a father’s fear, it pulled me into a larger and even more profound story, one that would change the course of three nations—one young, two ancient, all fighting for survival.”   — Candice Millard, bestselling author of The River of Doubt: Theodore Roosevelt’s Darkest Journey

“It seemed Jemima Boone’s fate to be taken hostage—if not by Kentucky Indians then by fiction and legend.  Even a cousin had a go at her story, in verse.  Sensitively and eloquently, writing his way around the silences, Matthew Pearl rescues her at last.  Fearlessness seemed to run in the family; Jemima could neither read nor write, yet had an uncanny ability to communicate with her father, conspiring with him from a distance, assisting with his rescue, under gunfire, at close hand.  A rousing tale of frontier daring and ingenuity, better than legend on every front.”
— Pulitzer Prize–winning author Stacy Schiff