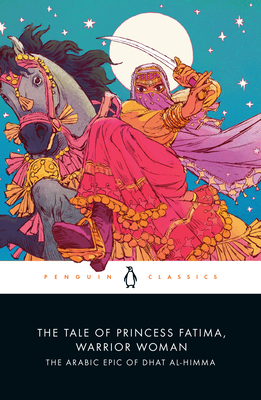 Published in English for the first time, and the only Arabic epic named for a woman, The Tale of Princess Fatima recounts the thrilling adventures of a legendary medieval warrior universally known throughout the Middle East and long overdue to join world literature's pantheon of female heroes.

A fearsome, sword-slinging heroine who defeated countless men in stealth attacks on horseback, Dhat al-Himma, or Princess Fatima, was secretly given away at birth because she wasn't male, only to triumph as the most formidable warrior of her time. Known alternately as "she-wolf," "woman of high resolve," and "calamity of the soul," she lives on in this rousing narrative of female empowerment, in which she leads armies of more than seventy thousand men in clashes between rival tribes and between Muslims and Christians; reconciles with her father after taking him prisoner; and fends off her infatuated cousin, who challenges her to a battle for the right to marry her. Though her cousin suffers an ignominious defeat, he impregnates Fatima against her will and, when she gives birth to a Black son, disowns his own son, who also grows up to be a great warrior, eventually avenging his mother's honor. The epic culminates in a showdown between Fatima and another formidable warrior woman, and earns Fatima a place alongside the likes of Circe, Mulan, Wonder Woman, Katniss Everdeen and other powerful women.

Melanie Magidow (editor/translator) is an independent scholar and professional translator with a Ph.D. in Middle Eastern Languages and Cultures from the University of Texas at Austin. She has received fellowships from the National Endowment for the Arts, the National Endowment for the Humanities, and the Fulbright Commission. She lives in Rhode Island.

Longlisted for the National Translation Award in Prose

“[An] excellent English adaptation of a thrilling Arab epic . . . filled with fabulous characters and adventure . . . The tales are as captivating as they are complex. . . . As electrifying as the original.” ―Arab News

“A fun and exciting read . . . A delightful, action-packed adventure that both entertains and provides insight into the time and culture that birthed it . . . Excellently curated and translated . . . The epic is brimming with as much sense of wonder as The Odyssey, as much storytelling inventiveness as The Arabian Nights, and as much exploration of battle and conflict as The Iliad. . . . [It] deserves to take its place in the pantheon of ancient classics. Penguin Classics are to be applauded for making it available in this approachable form to anglophone audiences.” ―The Fantasy Hive

“A very good and enjoyable little read . . . Consistently engaging . . . The narrative moves at a very quick pace, so it never bogs down in boring battle-accounts. . . . Magidow has certainly succeeded in presenting an engaging series of stories featuring a number of compelling figures―above all, and particularly successfully, that of Fatima, who is, in fact, a much more complex character than just that of a woman who is an outstanding fighter. . . . A useful introduction and then notes make for good (and not overwhelming) supporting material. . . . A neat and welcome addition to what early Arabic fiction is available in English.” ―The Complete Review

“A narrative that overflows with intrigue, adventure, and political dealings, all held together by the legendary heroine at the story’s center.” ―Words Without Borders

“[This] popular epic still captivates to this day, with its picture of a female soldier not as a mere foil but in fact the star of the show. . . . By means of a dozen or so well-picked episodes, and in the uncluttered language of oral epic, Magidow’s rendering . . . dare[s] us to think of women as expert fighters as well as wives and mothers.” ―Newlines Magazine

“An absolutely lovely edition . . . A really enjoyable read in addition to something you can use in the classroom . . . and understand how this fits in world literature.” ―M. Lynx Qualey, Bulaq podcast

“My book of the year . . . This is a super fun tale. . . . It is really interesting . . . in the ways it plays with gender and race. . . . If you’re looking for a new primary source to get people interested in the Middle Ages in your classes, you really should consider this book. It really has a nice, interesting mix of societal commentary, fun medieval stuff, medieval warfare stuff, and different kinds of things that you couldn’t get in, say, The Song of Roland. . . . It’s something I think that people will want to read just in the same way that people like to read these Norse epics, like Egil’s Saga or even the chivalric romances. . . . I’ve read it twice now, and I’ve really enjoyed it.” ―Peter Konieczny, Medievalists.net podcast

“In her beautiful translation, Melanie Magidow captures the forceful yet melodic language of this epic. It is an epic that reveals the wisdom of women through the centuries while tackling issues of gender, color, race, beauty, courage, and war that are pertinent to our times. Indispensable to any library, it should be taught to generations of readers all over the world. One has to be grateful to Magidow for editing and translating it: not only does it contribute to the knowledge of humanity and promote acceptance and tolerance, but it is also a page turner and really fun to read.” ―Reem Bassiouney, author of The Pistachio Seller

“This powerful epic with its all-conquering heroine brings the world of Arab chivalry to blazing life, in a wonderful translation with a very informative introduction.” ―Humphrey Davies, award-winning translator of Naguib Mahfouz, Elias Khoury, and Alaa Al-Aswany

“Princess Fatima, Warrior Woman, Fiend of Bani Tayy, Paragon of Ambition, bursts from the pages of this book in glorious splendor, in this timeless tale of a woman’s unwavering commitment to her ideals and beliefs in a hostile and patriarchal world. Throughout her epic battles against Arab tribesmen and Byzantine armies, this unconquerable warrior proves unwavering in her adherence to her code of conduct. Congratulations to Melanie Magidow, her intrepid translator, for such a deft, pacy, intelligent, and fresh translation.” ―James E. Montgomery, University of Cambridge

“An emotive, dynamic rendering that exquisitely captures the spirit of the original text, the variety of its characters, and the versatility of its messages. The Tale of Princess Fatima has much to tell us about what it has meant—in different times and places—to be a hero.” ―Rachel Schine, University of Colorado Boulder

“The iron Valkyrie Princess Fatima joins a whole cast of female champions out for blood and honor in this fluidly translated epic that is part battlefield saga, part chanson de geste, part family drama, and all heroine’s journey, one worthy of inclusion with the great warrior women classics.” ―Kevin Blankinship, Brigham Young University

“Melanie Magidow’s eminently readable translation brings to life the excitement and adventure of this female hero from the early medieval Islamic world. Fatima is a nuanced heroine who composes poetry, fends off potential rapists, wins battles, tricks villains, and governs her kingdom in a turbulent world. The Arabic Epic of Dhat al-Himma provides us with a warrior, mother, politician, and strategist for the ages.” ―Mary Dockray-Miller, Lesley University

“Dr. Magidow’s selection and translation of this timeless Arabic epic is a watershed event in the history of Arabic literature in the west. The translation is a work of art unto itself. And going against the grain of stereotypes and orientalism, the translation turns the perennial problem of patriarchy and hypermasculinity on its head and reverberates with themes in Shahrazad’s stories, the poetry of Hujayja of the Banu Shaban, Rabi'a al-Adawiyya, and Wallada bint al-Mustakfi. Readers are generously rewarded as they witness the intrepid spirit of Fatima.” ―Samer Ali, University of Michigan