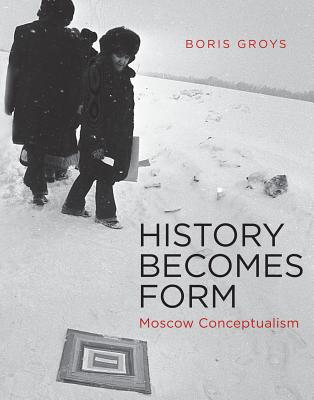 An insider's account of the art and artists of the most interesting Russian artistic phenomenon since the Russian Avant-Garde.

In the 1970s and 1980s, a group of "unofficial" artists in Moscow--artists not recognized by the state, not covered by state-controlled media, and cut off from wider audiences--created artworks that gave artistic form to a certain historical moment: the experience of Soviet socialism. The Moscow conceptualists not only reflected and analyzed by artistic means a spectacle of Soviet life but also preserved its memory for a future that turned out to be different from the officially predicted one. They captured both the shabby austerity of everyday Soviet life and the utopian energy of Soviet culture. In History Becomes Form, Boris Groys offers a contemporary's account of what he calls the most interesting Russian artistic phenomenon since the Russian avant-garde.

The book collects Groys's essays on Moscow conceptualism, most of them written after his emigration to the West in 1981. The individual artists of the group--including Ilya Kabakov, Lev Rubinstein, and Ivan Chuikov--became known in the West after perestroika, but until now the artistic movement as a whole has received little attention. Groys's account sheds light not only on the Moscow Conceptualists and their work but also on the dilemmas of Soviet artists during the cold war.

Boris Groys is Professor of Russian and Slavic Studies at New York University. He is the author of many books, including Ilya Kabakov: The Man Who Flew into Space from His Apartment (2006) and Art Power (2008), both published by the MIT Press.