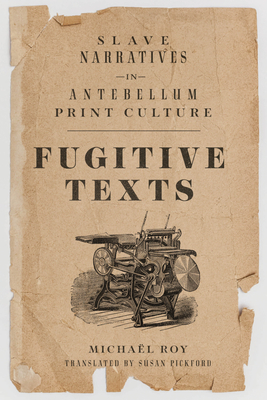 By Michaël Roy, Susan Pickford (Translated by)
$79.95
Email or call for price.

Antebellum slave narratives have taken pride of place in the American literary canon. Once ignored, disparaged, or simply forgotten, the autobiographical narratives of Frederick Douglass, Harriet Jacobs, and other formerly enslaved men and women are now widely read and studied. One key aspect of the genre, however, has been left unexamined: its materiality. What did original editions of slave narratives look like? How were these books circulated? Who read them?
In Fugitive Texts, Michaël Roy offers the first book-length study of the slave narrative as a material artifact. Drawing on a wide range of sources, he reconstructs the publication histories of a number of famous and lesser-known narratives, placing them against the changing backdrop of antebellum print culture. Slave narratives, he shows, were produced through a variety of print networks. Remarkably few were published under the full control of white-led antislavery societies; most were self-published and distributed by the authors, while some were issued by commercial publishers who hoped to capitalize on the success of Harriet Beecher Stowe’s Uncle Tom’s Cabin. The material lives of these texts, Roy argues, did not end within the pages. Antebellum slave narratives were “fugitive texts” apt to be embodied in various written, oral, and visual forms.
Published to rave reviews in French, Fugitive Texts illuminates the heterogeneous nature of a genre often described in monolithic terms and ultimately paves the way for a redefinition of the literary form we have come to recognize as “the slave narrative.”

Michaël Roy is an associate professor of American studies at Université Paris Nanterre and a fellow of the Institut Universitaire de France. His work has appeared in journals such as Slavery & Abolition, MELUS, and Papers of the Bibliographical Society of America. He is the editor of Frederick Douglass in Context.

Praise for the French edition:

“Rethinking the place of slave narratives in the literary and political fields of the antebellum United States, revisiting presuppositions: these are the points which allow this rigorous, vigorous, and very well-written work to stand out from other analyses of these texts.”—Textes & Contexte