Before All the World: A Novel (Hardcover) 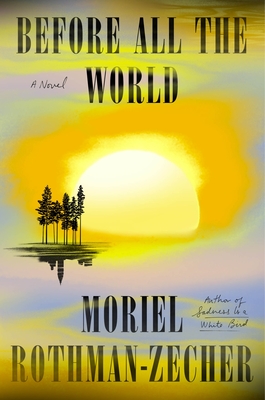 A mesmerizing, inventive story of three souls in 1930s Philadelphia seizing new life while haunted by the old.

"ikh gleyb nit az di gantze velt iz kheyshekh."
"I do not believe that all the world is darkness."

In the swirl of Philadelphia at the end of Prohibition, Leyb meets Charles. They are at a former speakeasy called Cricket's, a bar that welcomes, as Charles says in his secondhand Yiddish, feygeles. Leyb is startled; fourteen years in amerike has taught him that his native tongue is not known beyond his people. And yet here is suave Charles, fingers stained with ink, an easy manner with the barkeep, a Black man from the Seventh Ward, a fellow traveler of Red Emma's, speaking Jewish to a young man he will come to call Lion.

Lion is haunted by memories of life before, in Zatelsk, where everyone in his village, everyone except the ten non-Jews, a young poet named Gittl, and Leyb himself, was taken to the forest and killed.

And then, miraculously, Gittl is in Philadelphia, too, thanks to a poem she wrote and the intervention of a shadowy character known only as the Baroness of Philadelphia. And surrounding Gittl are malokhim, the spirits of her siblings.

Flowing and churning and seething with a glorious surge of language, carried along by questions of survival and hope and the possibility of a better world, Moriel Rothman-Zecher's Before All the World lays bare the impossibility of escaping trauma, the necessity of believing in a better way ahead, and the power that comes from our responsibility to the future. It asks, in the voices of its angels, the most essential question: What do you intend to do before all the world?

Moriel Rothman-Zecher is a Jerusalem-born novelist and poet. His first novel, Sadness Is a White Bird, was a finalist for the Dayton Literary Peace Prize and the National Jewish Book Award, the winner of the Ohioana Book Award, and longlisted for the Center for Fiction's First Novel Prize. Moriel's poetry and essays have been published in Barrelhouse, Colorado Review, The Common, The New York Times, The Paris Review's Daily, and ZYZZYVA, and he is the recipient of the National Book Foundation's '5 Under 35' Honor, two MacDowell Fellowships, and Yiddishkayt's Wallis Annenberg Helix Fellowship.

“Original, daring, experimental, moving, poignant, engaging . . . With shades of Tony Kushner and Cynthia Ozick . . . Before All the World understands how our worlds are made by words, and in the altering of the latter we may as yet redeem the former.”
—Ed Simon, The Millions, “Most Anticipated Books of 2022”

“Before All the World is beautiful and original. It is also strange, arresting, high-risk. Very quickly this novel starts to work on the mind, making itself felt in complex and powerful and visionary ways, led by the rhythm in the language and the urge to make that language new.”
—Colm Tóibín, author of The Magician

“Evocative, inventive, vivid, and strange, Before All the World is a mesmeric, enrapturing read.”
—Eimear McBride, author of Strange Hotel

“Before All the World startles and swirls, and makes fresh the experience of language itself. It has it all: a gripping story, an original structure, and a tender, ghostly glow.”
—Justin Torres, author of We the Animals

“Before All the World is a song about survival and a refusal to be erased. Daringly crafted and poetically told, this novel is a celebration of Moriel Rothman-Zecher’s extraordinary talent, compassion, and love for humanity. To read Before All the World is to abandon all of our expectations and privileges so that the torch of curiosity and the beauty of words can lead us to unexpected places, where we can see ourselves in those whom we might have considered the Other.”
—Nguyen Phan Que Mai, author of The Mountains Sing

“A ride as breathtaking as it is gratifying, Moriel Rothman-Zecher’s Before All the World deftly explores the relationship between three broken people: two pogrom refugees persecuted in their homeland by virtue of religion who cross an ocean to cross paths with a man persecuted in his own homeland by virtue of race. With tragicomic adroitness, Rothman Zecher’s meticulous prose is full of delicious humor and irony, a glorious Yidenglish tapestry confirming that the world is indeed not all darkness.”
—Kia Corthron, author of Moon and the Mars

“Before All The World is astonishing, spellbinding and poetic. It is a groundbreaking and awe-inspiring song of resilience, memory, identity and love. I can’t recall the last time I was so mesmerized by a work. The way the reader is carried by its characters, transported by its language, enveloped by its many worlds is stunningly beautiful. Simply, it’s a masterpiece—one of those rare books that upon reaching its last words you immediately need to start reading again!”
—Ariana Neumann, author of When Time Stopped