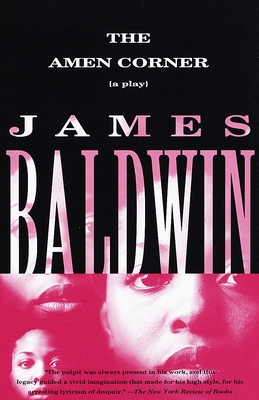 A scalding, uplifting, sorrowful, and exultant masterpiece of the modern American theater, The Amen Corner is a play about faith and family, about the gulf between black men and black women and black fathers and black sons.

In his first work for the theater, James Baldwin brought all the fervor and majestic rhetoric of the storefront churches of his childhood along with an unwavering awareness of the price those churches exacted from their worshipers.

For years Sister Margaret Alexander has moved her Harlem congregation with a mixture of personal charisma and ferocious piety. But when Margaret's estranged husband, a scapegrace jazz musician, comes home to die, she is in danger of losing both her standing in the church and the son she has tried to keep on the godly path.

James Baldwin was born in 1924 and educated in New York. Between 1953 and 1987, Baldwin wrote over twenty books of fiction and non-fiction. The recipient of a Guggenheim Fellowship and a Ford Foundation Grant, among other accolades, Baldwin was made a Commander of the Legion of Honor in 1986. He died one year later.

"He is thought-provoking, tantalizing, irritating, abusing and amusing. And he uses words as the sea uses waves." —Langston Hughes

"What style! What intensity! What religious feeling!.... The man has mastered his rage and bitterness. He's a marvel!" —John Cheever