The Lonely Man of Faith (Paperback) 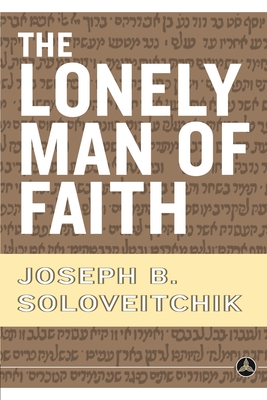 By Joseph B. Soloveitchik
$15.00
Email or call for price.

Joseph B. Soloveitchik, the rabbi known as “The Rav” by his followers worldwide, was a leading authority on the meaning of Jewish law and prominent force in building bridges between traditional Orthodox Judaism and the modern world. In The Lonely Man of Faith, a soaring, eloquent essay first published in Tradition magazine in 1965, Soloveitchik investigates the essential loneliness of the person of faith in our narcissistic, materially oriented, utilitarian society.

In this modern classic, Soloveitchik uses the story of Adam and Eve as a springboard, interweaving insights from such important Western philosophers as Kierkegaard and Kant with innovative readings of Genesis to provide guidance for the faithful in today’s world. He explains prayer as “the harbinger of moral reformation,” and discusses with empathy and understanding the despair and exasperation of individuals who seek personal redemption through direct knowledge of a God who seems remote and unapproachable. He shows that while the faithful may become members of a religious community, their true home is “the abode of loneliness.” In a moving personal testimony, Soloveitchik demonstrates a deep-seated commitment, intellectual courage, and integrity to which people of all religions will respond.

JOSEPH B. SOLOVEITCHIK was born in Russia in 1903 into a family of eminent Eastern European rabbis. In 1932 he became the chief rabbi of Boston, where he lived until his death in 1993. He founded the Maimonides School in Boston and for many years traveled to New York City to teach at Yeshiva University.

“ . . . one of the most personal expressions ever voiced by a modern Talmudic authority on the elemental power of religious faith and the ways in which the joy of life often comes mixed with longing, torment, and despair.” —Time