Between the Last Oasis and the Next Mirage: Writings on Australia (Paperback) 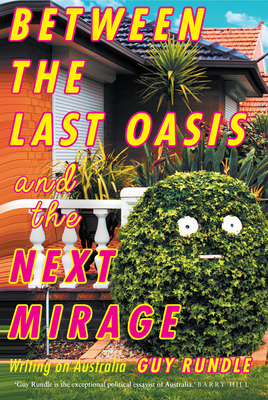 With sharp wit and a discerning eye, political commentator Guy Rundle enlightens and entertains, drawing back the curtain on the iconic moments in Australian politics of the 2010s. From the coal blockade frontline of the Liverpool Plains to Hobart's Cat and Fiddle arcade, from being on the road with last chance Malcolm Turnbull to the fossil fuel fantasies of Adaniland in the north, Guy Rundle gives a first-hand history of Australia in the 2010s, after the brief and hopeful haha insurgency of the Rudd-Gillard-Rudd era and the descent of another decade of reaction. Through multiple elections, rubbing shoulders with the major players and upstart independents, Rundle describes a country changing and fracturing as the global wave of populism swept across conventional politics, and the culture wars solidified. He goes into battle, both against a corrupt, cynical, and nihilistic right, and an increasingly elitist and fantastical progressivism. And he steps back into the past, looking at how we got to here, in memoirs and analyses of the shifting personal, cultural, and political faultlines of the past half century.

Guy Rundle: Born and raised in Melbourne and studied arts at Melbourne Uni in the 1980s. Started writing for the journal Arena in the late 1980s, and became an associate editor. In the early 1990s he became a theatre critic for various newspapers, becoming the Age theatre critic in 1994 to 1996. He was the inaugural (co-)editor of Arena Magazine from 1992 to 2006, and worked as a comedy writer for Full Frontal, Jimeoin, and other TV shows, and then as a producer-writer for Foxtel. In 1996 he wrote the stage show Club Republic for Max Gillies, the first of their four stage collaborations between then and