Tigerland: 1968-1969: A City Divided, a Nation Torn Apart, and a Magical Season of Healing (Paperback) 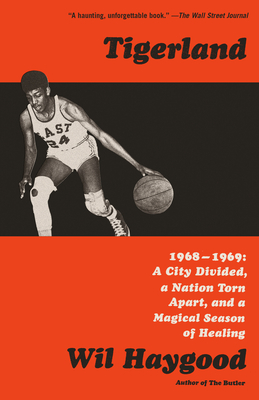 Against the backdrop of one of the most tumultuous periods in recent American history, as riots and demonstrations spread across the nation, the Tigers of poor, segregated East High School in Columbus, Ohio did something no team from one school had ever done before: they won the state basketball and baseball championships in the same year. They defeated bigger, richer, whiter teams across the state and along the way brought blacks and whites together, eased a painful racial divide throughout the state, and overcame extraordinary obstacles on their road to success. In Tigerland, Wil Haygood gives us a spirited and stirring account of this improbable triumph and takes us deep into the personal lives of these local heroes. At the same time, he places the Tigers’ story in the context of the racially charged sixties, bringing in such national figures as Jackie Robinson, Martin Luther King Jr., and Richard Nixon, all of whom had a connection to the teams and a direct effect on their mythical season.

Wil Haygood is currently visiting distinguished professor in the department of media, journalism, and film at Miami University, Ohio. For nearly three decades he was a journalist, serving as a national and foreign correspondent at The Boston Globe, where he was a Pulitzer Prize finalist, and then at The Washington Post. He is the author of The Butler: A Witness to History; Showdown: Thurgood Marshall and the Supreme Court Nomination That Changed America; Sweet Thunder: The Life and Times of Sugar Ray Robinson; In Black and White: The Life of Sammy Davis Jr.; Two on the River; King of the Cats: The Life and Times of Adam Clayton Powell Jr.; and The Haygoods of Columbus: A Family Memoir. The Butler was later adapted into the critically acclaimed film directed by Lee Daniels, starring Forest Whitaker and Oprah Winfrey. Haygood has received a John Simon Guggenheim Memorial Foundation Fellowship, a National Endowment for the Humanities Fellowship, and the 2017 Patrick Henry Fellowship Literary Award for his research for Tigerland. He lives in Washington, D.C.

“Dramatic, memorable, triumphant and heartbreaking. . . . Tigerland is about more than sports. Sports provides a plot line and characters for a conversation about race in America.” —Minneapolis Star Tribune

“Factoids coalesce to produce a vivid sense of the community’s deep identification with its sports team.” —The New Yorker

“An uplifting story. . . . [Filled with] rich detail about the city and the school. . . . [Haygood’s] forays into the minutiae of life in Columbus give the book depth and texture.” —The New York Times Book Review

“[Tigerland] cries out for a movie adaptation. . . . Haygood offers a vivid sense of the African-American community of East Columbus—the parents, pastors and local businessmen who cheered the Tigers on to victory.” —Newsday

“Dynamic, multidimensional, and heart-revving. . . . As in all his avidly read books, Haygood sets the stories of fascinating individuals within the context of freshly reclaimed and vigorously recounted African American history as he masterfully brings a high school and its community to life. This laugh-and-cry tale of rollicking and wrenching drama . . . is electric with tension and conviction, and incandescent with unity and hope.” —Booklist (starred review)

“The blood beats in Haygood’s latest book. . . . It is well-told history. It lends to a better understanding of who we are and where we live.” —Michael Arace, The Columbus Dispatch

“[Haygood] has gifted the reading public with a book about a defining moment in America. . . . [Tigerland] is in keeping with Haygood’s style of well-written prose, allowing the characters to speak for themselves, and placing the reader as a participant in the book rather than an observer.” —Decatur Daily

“An engrossing tale of one shining moment in dark times. . . . Haygood dramatically renders the heady excitement of each game, the tense moments of a close contest, and the exuberant—tear-jerking—wins.” —Kirkus Reviews (starred review)

“In the supremely talented hands of Haygood, the Tigers of an all-black Columbus, Ohio, school prove to be an ideal way of understanding [a] fraught time.” —The National Book Review

“Haygood’s look at the socially turbulent atmosphere [of 1968-69], told from the perspective of a black man coming of age at the time, is nationally relevant.” —Nancy Gilson, The Columbus Dispatch

“[An] intense sports saga. . . . Haygood is a passionate storyteller as he expertly captures this period of civil unrest” —Publishers Weekly

“With Tigerland, Haygood is shining a light on [a] story long in the shadows: teenage athletes who brought unity to their community through the power of sports.” —Toledo Blade

“Inspiring. . . . Haygood tells the story of an amazing group.” —CBC