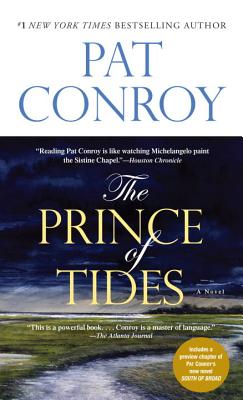 Pat Conroy has created a huge, brash thunderstorm of a novel, stinging with honesty and resounding with drama. Spanning forty years, this is the story of turbulent Tom Wingo, his gifted and troubled twin sister, Savannah, and their struggle to triumph over the dark and tragic legacy of the extraordinary family into which they were born.
Filled with the vanishing beauty of the South Carolina Low Country as well as the dusty glitter of New York City, The Prince of Tides is Pat Conroy at his very best.

Pat Conroy (1945 2016) was the author of The Boo, The Water Is Wide, The Great Santini, The Lords of Discipline, The Prince of Tides, Beach Music, The Pat Conroy Cookbook: Recipes of My Life, My Losing Season, South of Broad, My Reading Life, and The Death of Santini. From the Trade Paperback edition."

"A masterpiece than can compare with Steinbeck's East Of Eden... Some books make you laugh; some make you cry; some make you think. The Prince Of Tides is a rarity: It does all three."—Detroit Free Press

"A big sprawling saga of a novel, the kind Steinbeck used to write, the kind John Irving keeps writing, the kind you can hole up with and spend some days with and put down feeling that you've emerged from a terrible, wonderful spell."—San Francisco Chronicle

"A brilliant novel that ultimately affirms life, hope and the belief that one's future need not be contaminated by a monstrous past."—Chicago Tribune

“This is a powerful book. . . . Conroy is a master of language.”—Atlanta-Journal Constitution

“A literary gem . . . The Prince of Tides is in the best tradition of novel writing. It is an engrossing story of unforgettable characters.”—Pittsburgh Press