Convicted in the Womb: One Man's Journey from Prisoner to Peacemaker (Paperback) 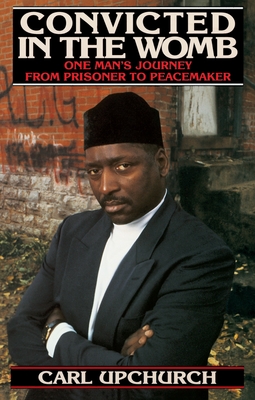 An unforgettable true story of gang warfare and a bold manifesto for addressing racial injustice, from a former gang member and renowned lecturer

“An inspiring personal litany of human renewal and accomplishment. Upchurch gives us hope that we can change society.”—Dr. Earl Ofari Hutchinson, author of The Assassination of the Black Male Image

Once Carl Upchurch was an elementary school dropout fighting for survival on the streets of South Philadelphia, a gang member wedded to a life of violence, a bank robber facing a future in federal penitentiaries. Now he is a respected community organizer and one of the most compelling and visionary leaders of the civil rights movement.

Catapulted into the national spotlight following his organization of a summit that brought together the country's most notorious gangs, Carl Upchurch has found himself in direct conflict with other African American civil right leaders. This is his scathing critique of the established civil rights movement and his plan for solving the critical problems facing today’s urban American.

Carl Upchurch is the founder and executive director of the Council for Urban Peace and Justice in Pittsburgh, PA. He lectures widely on the state of urban affairs and has addressed major universities and converences as well as the United Nations. In 1993 he was awarded the National Humanitarian Award by Jesse Jackson’s Rainbow Coalition. He previously won the Southern Christian Leadership Conference’s National Peace Award and the Fellowship of Reconciliation’s Martin Luther King Jr. Award.

"This is not another sad personal litany of crime, drugs, violence and misery in the 'hood.'  This is an inspiring personal litany of human renewal and accomplishment.  Upchurch gives us hope that we can change society."
-- Dr. Earl Ofari Hutchinson author of The Assassination of the Black Male Image

" Convicted in the Womb by Carl Upchurch was a painful book for me to read, but I know what he says is fact for too many America's children.  It should be read by every individual who has ever doubted the value and importance of early childhood education, cares about children and the future of our society."
-- Dr. Joycelyn Elders, Arkansas Children's Hospital

"A provocative memoir of life as an enemy of society--Upchurch has become a thinker and social critic well worth paying attention to."
--Kirkus Reviews