When Your Family Says No: The Journey to Freedom, Independence, and Happiness (Paperback) 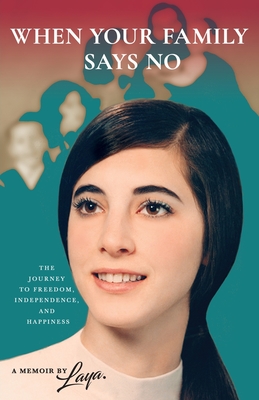 ﻿As the fourth daughter of a prominent Orthodox Jewish family in New York, I was expected to attend a religious seminary for girls, date the suitors my father arranged, become engaged by 19, marry within six weeks, and have as many children as I could bear, raising my family in a house of Godly belief.

No one guessed that at 19, I was spellbound, in forbidden love with a man 18 years my senior. I finally ran away with him. I had never held a boy's hand, much less made love to a man; I had never been dancing, eaten a meal at a non-Kosher restaurant or been close to a non-Jewish friend. This rhapsodic feeling of freedom, the sensual pleasure and the decadence of newfound independence came at the price of almost unbearable heartbreak. In marrying the man I loved, I was considered a traitor, abandoning centuries of tradition and rabbinic law. My runaway marriage in Reno began a mythic journey to what Hegel and Kierkegaard would call "true selfhood."

Set during the Vietnam era through present day and relatable across religious, cultural and ethnic backgrounds, When Your Family Says No is a memoir about choice, the complexity of family love, and how desire does not stop because of the confines of rigid rabbinical rules. My marriage was not a protest or rebellion against my family or my Orthodoxy. I didn't plan on falling in love; it simply happened. I wanted to be with the man I loved and also stay within the confines of my family. But behind the lush lawns and beautiful brick facades in which I was raised lay a prejudice and conditional love that was both shocking and tragic.

The book is for anyone who has fallen in love, strayed from their family's rules of conduct or needed to break out; it's for Muslims who do or don't want to wear the headscarf, gays raised in a born-again culture, teenagers just starting to have doubt and mid-lifers who are about to make a change from a culture that presupposes their identity. It's for anyone who chooses love over tradition.

The highly personal narrative mixed with historical insight gives readers a glimpse into the secreted world of Orthodoxy where everything from how a girl puts on her socks in the morning to the prayer she recites after using the bathroom, to when her husband makes love to her, is determined by rabbinic law. And yet its content is universal. Who among us hasn't read illicit material? Attended a forbidden film? Held secrets? Been alienated? Dreamed of breaking away? How many are still following their community's beliefs with the insistent feeling that something inside them might be dying? When Your Family Says No explores the terror and self-determination that come from breaking taboo and tradition and finding the strength we need to discover God and a family of our own that finally says yes.