The Lay of the Land (Compact Disc) 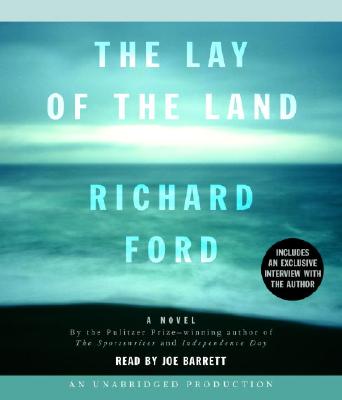 With The Sportswriter, in 1985, Richard Ford began a cycle of novels that ten years later – after Independence Day won both the Pulitzer Prize and the PEN/Faulkner Award – was hailed by The Times of London as “an extraordinary epic [that] is nothing less than the story of the twentieth century itself.”

Frank Bascombe’s story resumes, in the fall of 2000, with the presidential election still hanging in the balance and Thanksgiving looming before him with all the perils of a post-nuclear family get-together. He’s now plying his trade as a realtor on the Jersey shore and contending with health, marital and familial issues that have his full attention: “all the ways that life seems like life at age fifty-five strewn around me like poppies.”

Richard Ford’s first novel in over a decade: the funniest, most engaging (and explosive) book he’s written, and a major literary event.

“Ford captures the intricacies of human beings better than just about any other writer alive. . . . [He] is a great surveyor of human nature, a master of the small moments that take place in between and shape the larger movements of our lives.”
–The Globe and Mail

“With a mastery second to none, Richard Ford has created a character we know as well as our next-door neighbours.
Frank Bascombe has earned himself a place beside Willy Loman and Harry Angstrom in our literary landscape, but he has done so with a wry wit and a fin de siècle wisdom that is very much his own.”
–The New York Times Book Review

“Ford is one of the greatest writers of our time, from any country and in any language, whose finely crafted words can pierce the heart like an arrow.”
–Calgary Herald