1,107 Baby Names That Stand the Test of Time (Paperback) 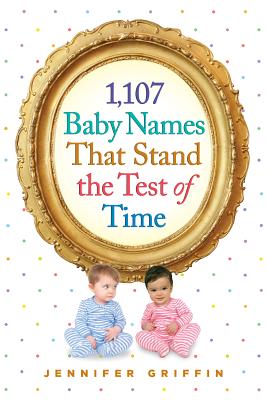 By Jennifer Griffin
Email or call for price
Out of Print

There are tens of thousands of baby names out there—and books that dutifully list them. And then there is 1,107 Baby Names That Stand the Test of Time—a curated, considered, opinionated, and richly informative guide that winnows down the world of baby names to help moms and dads make smart choices, sidestep the trendiness trap, and avoid the ranks of parents (more than 54%) who later regret the name they chose.

A guide for parents who know that the perfect name lasts a lifetime—it suits not just a cuddly newborn but grows with a child from babyhood through adulthood. 1,107 Baby Names That Stand the Test of Time makes a strong case for each name selected and features the name's definition, history, variations and nicknames, and its "meaning" in the larger cultural sense. Includes a primer on the basic rules of baby naming including sounds, rhythm, ethnic traditions, and effective use of a middle name.

Jennifer (“soft and white”) Griffin is the author of Humpty Who? and the mother of two. As a Jennifer—the most common name of her generation— she has been obsessed with names her whole life. She and her husband live in New York City with their son, Luke (“worshipful”), and daughter, Josephine (“God adds”).