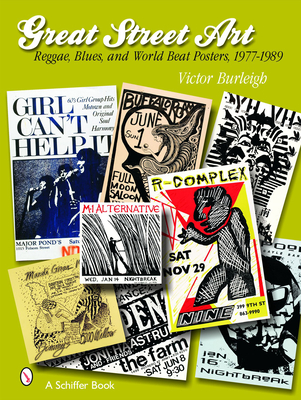 By Victor Burleigh
$29.95
Email or call for price.

Bob Marley died in 1981, but the interest he generated in the raggae, blues, and world beat music continued to grow. Around the world local bands sprang up and clubs began to feature the music to ever-increasing numbers of patrons. To advertise these events hundreds of posters were hung on telephone poles, vacant walls, and shop windows. Made on photocopiers and litho presses, by local artists, they have the edge that comes from needing to catch one's attention with a minimum of expense. The result is raw, in-your-face street art that captures the spirit of a generation. Victor Burleigh has gathered together more than 500 original posters dating from 1977 to 1989, from San Francisco, a city on the cutting edge of the music world and a haven for raggae, blues, and world beat music. Nearly every night one of the many music clubs would offer a live concert of an up-and-coming group. Since every club produced its own posters, there is a wide variety of styles and graphic images, as well as a history of the music scene captured in these posters. They are reproduced in this large volume that is a must for graphic designers, rock historians, and collectors. It is a perfect companion to Burleigh's first book, Great Rock & Roll Street Art.

Victor Burleigh is a antique dealer and collector specializing in Rock and Roll memorabilia. He resides in Vancouver, Washington.