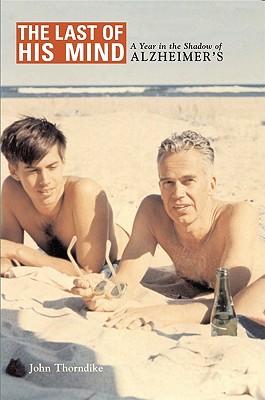 By John Thorndike
Email or call for price
Out of Print

Joe Thorndike was managing editor of Life at the height of its popularity immediately following World War II. He was the founder of American Heritage and Horizon magazines, the author of three books, and the editor of a dozen more. But at age 92, in the space of six months he stopped reading or writing or carrying on detailed conversations. He could no longer tell time or make a phone call. He was convinced that the governor of Massachusetts had come to visit and was in the refrigerator.

Five million Americans suffer from Alzheimer’s, and like many of them, Joe Thorndike’s one great desire was to remain in his own house. To honor his wish, his son John left his own home and moved into his father’s upstairs bedroom on Cape Cod. For a year, in a house filled with file cabinets, photos, and letters, John explored his father’s mind, his parents’ divorce, and his mother’s secrets. The Last of His Mind is the bittersweet account of a son’s final year with his father, and a candid portrait of an implacable disease.

It’s the ordeal of Alzheimer’s that draws father and son close, closer than they have been since John was a boy. At the end, when Joe’s heart stops beating, John’s hand is on his chest, and a story of painful decline has become a portrait of deep family ties, caregiving, and love.

“A brave, moving story of a son’s devotion to his dying father…. Thorndike’s prose is serenely beautiful and his patience in caring for an Alzheimer’s patient is extremely admirable. An affecting work of emotional honesty and forgiveness.”—Kirkus Reviews

“Written in a journal-like style, The Last of His Mind is an insightful, forthright and open-hearted dive into the ravages of rapid onset dementia…. One of the shining glories of this moving father-son portrait is that it squashes the fear conjured by Alzheimer’s and shows us how the debilitating process suffered by a loved one can be accepted and embraced.”—Kassie Rose, The Longest Chapter

“The first few pages of The Last of His Mind are dynamite, in their quiet way. They open up a world that, if you've known it and lived in it, conks you on the head, bashes your memory, brings it all back in a rush…. This memoir is far too elegantly written to ever state it directly, but the reader is made aware of the high honor involved: The author honors his father in the most profound way and is blessed, in turn, by participating in the most taxing event in his father’s life.”—Washington Post Book World

“A beautiful book, this memoir reveals the painful chaos of Alzheimer’s, as well as the strength, faith and unexpected joys that come with caring for a loved one in his last days.” —Publishers Weekly

“(O)ne has to admire the honesty of the author who sets forth all his feelings, whatever light they may shine on his character…. One comes away from this book impressed by the author’s devotion to his father, and the art he displays in organizing and writing this poignant memoir.”—Ohioana Quarterly