Voices from the Ape House (Paperback) 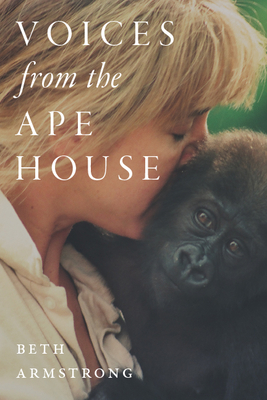 Exploring the history humans share with gorillas, Voices from the Ape House offers a behind-the-scenes look at the complicated social lives of western lowland gorillas through the eyes of a devoted zookeeper. The memoir traces Beth Armstrong’s love and fascination for animals, from her childhood to her work with captive primates as an adult. Through her eyes, readers sense the awe and privilege of working with these animals at the Columbus Zoo. Individual gorillas there had an enormous effect on her life, shaping and influencing her commitment to improving gorilla husbandry and to involving her zoo in taking an active role to protect gorillas in the wild.

Through anecdotal stories, readers get a glimpse into the fascinating lives of gorillas—the familiar gentleness of mothers and fathers toward their infants, power plays and social climbing, the unruly nature of teenagers, the capacity for humor, and the shared sadness by group members as they mourn the death of one of their own. In the end, Armstrong’s conflict with captivity and her lifelong fondness for these animals helped shape a zoo program dedicated to gorilla conservation.

Beth Armstrong spent much of her life caring for and observing gorillas—first as a keeper and then as head keeper at the Columbus Zoo, 1982–1996. She became a passionate proponent and voice for gorillas in the wild—and many other species—as the first Field Conservation Coordinator at the Columbus and Brevard Zoos, respectively. She continues to promote the role of zoos in supporting fieldwork that actively protects great ape species in the wild.

“Gorillas are also individuals, with unique quirks, personalities, and histories, and Armstrong writes about them with insight, intimacy, and heart in her lovely new memoir, Voices from the Ape House.” —Dave Ghose, Columbus Monthly

“Armstrong was in the forefront of exchanging experiences with other zoos around the world, developing a network of relationships that spread advances made in gorilla husbandry and zoo management.…Though the author's discussions of zoo management are … engaging, the most heart-touching material is found in the profiles of the gorillas. A pleasing gathering of distinct personalities and unique stories from the ape house.”—Kirkus Reviews

“Voices from the Ape House is a powerful journey through a remarkable time in zoological history. Throughout, Beth Armstrong examines the unique relationship between animals and people—showing that there is so much more to be learned as we work every day to conserve these magnificent creatures.” —Jack Hanna, host of Jack Hanna’s Into the Wild

“Beth Armstrong turns a revealing account of her career as an ape keeper into a love song for an extraordinary species. She captures the poignant tension between the magic of interacting closely with gorillas in captivity and the desperate need to support them in the wild. Her intimate revelations beautifully demonstrate that storytelling has a vital role to play in inspiring the next generation of conservationists.” —Dr. Richard Wrangham, author of The Goodness Paradox: The Strange Relationship Between Virtue and Violence in Human Evolution


“This beautifully written, heartfelt account of a zookeeper's experiences when in the company of gorillas testifies to the richness and rewards of human-animal coexistence. It is a must-read for all wildlife enthusiasts and certainly for budding zookeepers.” —Richard Johnstone Scott, former head gorilla keeper at Howletts Wild Animal Park and Jersey Island Zoo and author of Jambo: A Gorilla’s Story