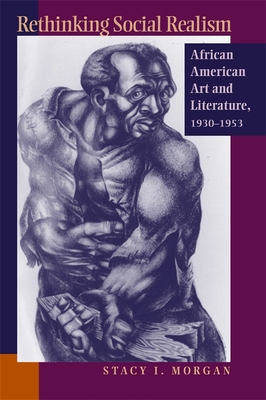 The social realist movement, with its focus on proletarian themes and its strong ties to New Deal programs and leftist politics, has long been considered a depression-era phenomenon that ended with the start of World War II. This study explores how and why African American writers and visual artists sustained an engagement with the themes and aesthetics of social realism into the early cold war-era--far longer than a majority of their white counterparts.

Stacy I. Morgan is an assistant professor of American studies at the University of Alabama.

"Stacy I. Morgan has given us an original, insightful, and compelling examination of black culture workers from the depression to the cold war. By identifying the importance of social realism as a movement for black artists and their role in helping to shape and inform that movement, Morgan demands a reconsideration of this important period. He reminds us that these visual artists, novelists, and poets were consciously aware of their participation in a broad-based movement to engage questions of racial and class inequities. While many here are known for their individual achievements, Morgan reminds us that together they formed a community of activist-artists. A bold and important book, Rethinking Social Realism is a model of interdisciplinary scholarship at its best. It is sure to set the direction for future studies of this kind."--Farah Jasmine Griffin, author of If You Can't Be Free, Be a Mystery

"In the canon of African American culture Stacy Morgan's Rethinking Social Realism is an important analysis of the 1930s as a significant period of development in African American art and literature—a period in which the artists and writers moved away from a focus on the evolving black middle class as a subject to a more sympathetic focus of visualizing and writing about the common man. This focus was a component in the search for a wholly 'American Art.' . . . This book is a precursor to explaining the significant focus on realism in the African American art of the sixties, seventies, and eighties."--Deborah Willis, Professor of Photography and Imaging, New York University

"Morgan opens the door for more scholarship that holds up the connections—commonalities and diversions—across disciplinary and community boundaries."--American Studies

"This is an ambitious synthesis of a great deal of material. . . . Rethinking Social Realism is a finely detailed study uncovering much that is original and compelling."--Journal of American History

"Brilliantly set out . . . Morgan’s book takes the reader on a breathtaking journey into the works of diverse black artists, intellectuals, and writers who gave shape to a broad coalition and a loosely affiliated movement for social change . . . Written in a clear, easy-to-follow style, the book is well researched . . . Morgan has convincingly shown that black social realists of the era were collectively and effectively the racial memory (griots) through their paintings, poems, essays, and activism"--African American Review

"Stacey Morgan's Rethinking Social Realism is an innovative and valuable book that explores the social realist works of black writers and painters in the era between the Depression and the Cold War. Morgan makes a strategically brilliant move by invigorating our understanding of black social realist writers by placing them in dialogic relationships with black painters."--Register of the Kentucky Historical Society

"Rethinking Social Realism expands our understanding of social realism . . . Morgan's multimedia approach gives us a much needed panoramic view . . . Morgan effectively and seamlessly navigates a dense array of artists and writers across several hundred pages . . . well written, intellectually thorough, and well illustrated . . . An exciting, exemplary new contribution that will be useful to scholars in African American literature as well as American studies.”--American Literature