Can't I Love What I Criticize?: The Masculine and Morrison (Hardcover) 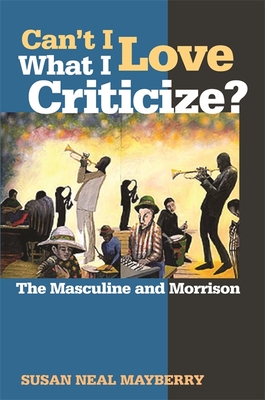 Taking a close look at all the key male figures in Toni Morrison's eight novels, this book explores Morrison's admitted, but critically neglected, interest in the relationships between African American men and women and the "axes" on which these relationships turn. Most Morrison scholarship deals with her female characters. Can't I Love What I Criticize? offers a response to this imbalance and to Morrison's call for more work on men, who remain, in her words, "outside of that little community value thing."

The book also considers the barriers between black men and women thrown up by their participation in a larger, historically racist culture of competition, ownership, sexual repression, and fixed ideals about physical beauty and romantic love. Black women, Morrison says, bear their crosses "extremely well," and black men, although they have been routinely emasculated by "white men, period," have managed to maintain a feisty "magic" that everybody wants but nobody else has. Understanding Morrison's treatment of her male characters, says Susan Mayberry, becomes crucial to grasping her success in "countering the damage done by a spectrum of sometimes misguided isms"--including white American feminism. Morrison's version of masculinity suggests that black men have "successfully retained their special vitality in spite of white male resistance" and that "their connections to black women have saved their lives." To single out her men is not to negate the preeminence of her women; rather, it is to recognize the interconnectedness and balance between them.

Susan Neal Mayberry is a professor of English at Alfred University.

"A timely and comprehensive exploration of Toni Morrison's novels to date as they relate to black masculinity, Mayberry's Can't I Love What I Criticize? is a major contribution to ongoing literary, historical, and social discussions regarding African American gender relations and the formation of community.”--Jeffrey B. Leak, author of Racial Myths and Masculinity in African American Literature

"Mayberry charts important new territory in Toni Morrison studies and African American masculinity studies with this original and daring analysis of the complicated, wide-spirited lives of Morrison’s male characters. Grounded in the growing body of work on black masculinity of the past decade and couched in attentiveness to the nuances of the author’s tragic and comic modes, Can’t I Love What I Criticize? reflects and refracts Morrison’s critical compassion for African American men caught between a rock and a hard place. Mayberry’s unerring ability to tease out Morrison’s dense webs of 'perpetual possibility' in the threatened lives of black men pushes conversations about race and gender in American culture to a new level. This is a book that Morrison readers and scholars will be consulting and responding to for years to come."--Minrose Gwin, author of The Woman in the Red Dress: Gender, Space and Reading

“Those searching for a comprehensive, sustained, nuanced examination of masculinity in Toni Morrison's novels will welcome Mayberry's Can't I Love. The book is a brilliant and delightful engagement with masculinity in Morrison's first eight novels. It is, to borrow one reader's adjective, a ‘fresh’ look at a recurring theme and an important issue in Morrison's canon.”—African American Review