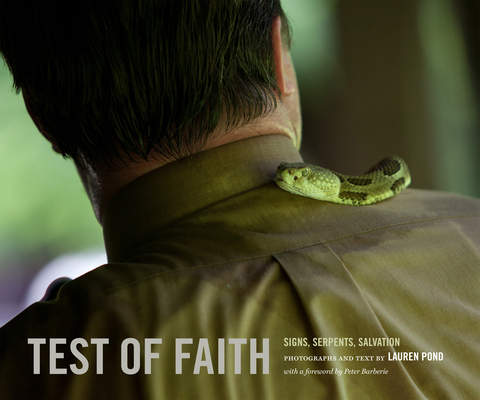 Pentecostal serpent handlers, also known as Signs Followers, hold a literal interpretation of a verse in the New Testament's Gospel of Mark which states that, among other abilities, true believers shall be able to "take up serpents." For more than a century members of this uniquely Appalachian religious tradition have handled venomous snakes during their worship services, risking death as evidence of their unwavering faith. Despite scores of deaths from snakebite and the closure of numerous churches in recent decades, there remains a small contingent of serpent handlers devoted to keeping the practice alive. Who are the serpent handlers? What motivates them to continue their potentially lethal practices through the generations? Documentary photographer Lauren Pond traveled to West Virginia in search of answers to these questions. There she met Pastor Randy "Mack" Wolford, one of the best-known Signs Following preachers in the region, and spent the following year documenting Mack and his family. The course of her work changed dramatically in May 2012, when Mack, then forty-four years old, suffered a fatal rattlesnake bite during a worship service she attended. Pond photographed the events that followed and has continued her relationship with Mack's family. Test of Faith provides a deeply nuanced, personal look at serpent handling that not only invites greater understanding of a religious practice that has long faced derision and criticism; it also serves as a meditation on the photographic process, its ethics, and its capacity to generate empathy. Published by Duke University Press and the Center for Documentary Studies at Duke University.

Lauren Pond is an award-winning freelance photographer based in Columbus, Ohio, the manager of the Fresh A.I.R. Gallery, and a multimedia content producer for the Center for the Study of Religion at Ohio State University. Pond earned a B.S. and B.A. at Northwestern University in 2009 and an M.A. from Ohio University in 2014. Her photographs have been seen in solo and group exhibitions throughout the United States and in Australia. Pond has also spoken extensively on her work at academic conferences and universities in the United States. Peter Barberie is the Brodsky Curator of Photographs, Alfred Stieglitz Center, at the Philadelphia Museum of Art. In 2014, Barberie organized the exhibition Paul Strand: Master of Modern Photography, an in-depth retrospective of Strand's photography and films that has traveled internationally. He also organized the exhibition Zoe Strauss: Ten Years, a major mid-career survey of Strauss's photography. Barberie has written widely on contemporary art and received his Ph.D. from Princeton University in 2007.