The Joy of Discipleship: Reflections from Pope Francis on Walking with Christ (Paperback) 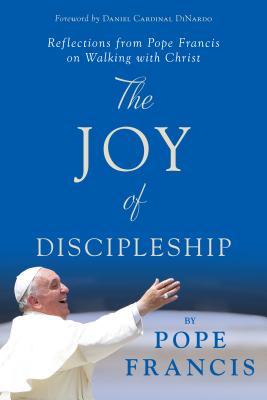 By Pope Francis, Daniel DiNardo (Foreword by)
$16.95
Email or call for price.

“Dear friends, be glad! Do not be afraid of being joyful!”
—Pope Francis, from The Joy of Discipleship

Near the end of Luke’s Gospel, two disciples slowly make their way home from Jerusalem to the village of Emmaus. At the outset, they are deeply saddened by Jesus’ tragic death. By that evening, however, they have made a 180-degree turn: from dejected disciples to followers filled with joy—a joy they simply must share with others as fast as they can. What accounts for this change? They have encountered the risen Christ!

In The Joy of Discipleship, Pope Francis reminds us that joy should be one of the defining characteristics of any person who has truly encountered Jesus. This skillfully curated collection of homilies, speeches, and other documents from Pope Francis, compiled and edited by James P. Campbell, offers a fresh perspective on why Christian disciples should be so joyful in the first place and how that joy might manifest itself in our individual daily lives. Covering a broad range of themes—Christ’s Resurrection, mercy, wealth and poverty, the Christian family, and more—The Joy of Discipleship moves us to meditate on Christ and then inspires us to move out from our own four walls, jubilantly proclaiming God’s transforming love in word and deed.

For anyone who wants what Pope Francis has—an active, abiding, authentic love for Jesus Christ, for the Church, and for the people of this world—The Joy of Discipleship will point the way.

“This volume gives us a portrait of the Pope and what amazing joy fills his life, his mind, his teaching . . . his discipleship!”
—From the foreword by Daniel Cardinal DiNardo

POPE FRANCIS was born Jorge Mario Bergoglio on 17 December 1936 in Buenos Aires, Argentina. As a young man, he worked briefly as a chemical technician and nightclub bouncer before entering the Jesuits. He was ordained a priest in 1969, and from 1973 to 1979, was Argentina's Provincial Superior of the Society of Jesus. He became the Archbishop of Buenos Aires in 1998, and was appointed a Cardinal in 2001. Following the resignation of Pope Benedict XVI on 28 February 2013, Bergoglio was named his successor on 13 March. He chose the name Francis in honor of Saint Francis of Assisi. He is the first Jesuit Pope, the first Pope from the Americas, the first Pope from the Southern Hemisphere, and the first non-European Pope in over 1200 years. Pope Francis has been noted for his humility, his concern for the poor, and his commitment to dialogue as a way to build bridges between people of all backgrounds, beliefs, and faiths.