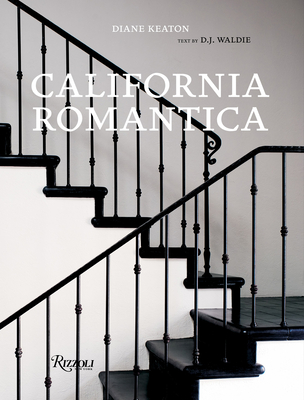 California Romantica features the most important, yet rarely seen, residential exemplars of the California Mission and Spanish Colonial styles, by such noted architects as George Washington Smith, Wallace Neff, Richard Requa, Lilian Rice, and Paul R. Williams, among others. From whitewashed stucco walls and cloistered patios to tile roofs and sumptuous gardens, each house shown is a rare masterpiece, splendidly appointed with authentic Monterey furniture, California tile, and Navajo rugs. Among the magnificent seaside estates, canyon villas, and courtyard bungalows shown is Diane Keaton’s former home in Beverly Hills, which she thoughtfully restored with noted designer Stephen Shadley, and for which she has been recognized as a committed preservationist. She brings her cinematic eye, a keen sense of natural drama, and a profound appreciation for the nuances of shadow and light to the elucidation of these buildings, through the selection of specially commissioned photography. Authoritative text by D. J. Waldie lucidly explicates the architecture and provides an intimate tour of a historic and distinctly Californian lifestyle.

Diane Keaton has been recognized for her work in California architectural preservation. She is widely known for her work in theater and film, and has won numerous awards and accolades, including an Oscar for her role in Annie Hall and praise for her work as director of Unstrung Heroes. D. J. Waldie is the author of Holy Land: A Suburban Memoir, which received the California Book Award for nonfiction in 1996, Where We Are Now: Notes from Los Angeles, and co-author of Real City: Downtown Los Angles Inside/Out. He is a regular contributor to Los Angeles Magazine, The Los Angeles Times, L. A. Weekly, and others.