Terry Pratchett: A Life With Footnotes: The Official Biography (Hardcover) 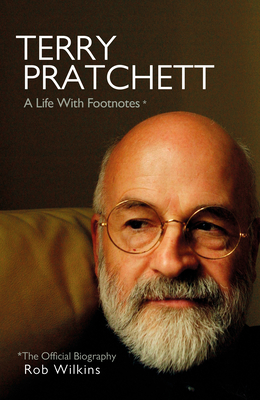 'People think that stories are shaped by people. In fact, it's the other way around.'

Terry Pratchett, creator of the phenomenally bestselling Discworld series, knight of the realm, and holder of more honorary doctorates than he knew what to do with, was known and loved around the world for his wildly popular books, his brilliant satirical humor, and for the humanity of his campaign work. But that's only part of the picture.

At the time of his death in 2015, he was working on his finest story yet—his own. The story of a boy who was told by his headteacher aged six that he would never amount to anything, and spent the rest of his life proving him wrong. Who walked out on his A levels to become a journalist, encountering some very dead bodies and the idea for his first novel before he reached twenty. Who celebrated his knighthood by smelting himself a sword, and who, on being awarded the prestigious Carnegie Medal, switched it during the prizegiving for a chocolate replica and proceeded to eat it in front of an audience of horrified librarians.

Tragically, Terry ran out of time to complete the memoir he so desperately wanted to write. But now, in the only authorized biography of one of our best known and best loved writers, his manager and friend Rob Wilkins picks up where Terry left off, and with the help of friends, family, and Terry's own unpublished work, tells the full story of an extraordinary life.

Rob Wilkins worked with Terry Pratchett for over twenty years, first as his assistant, and later business manager. He now manages the Pratchett estate and Terry's production company, Narrativia.