Reason: The Only Oracle of Man (Paperback) 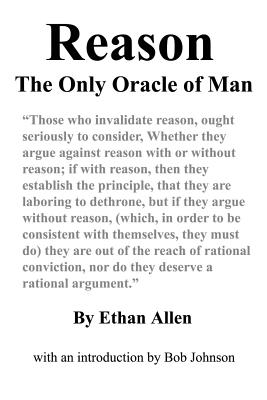 Ethan Allen's Reason: The Only Oracle of Man is a hard hitting attack on superstition and "revealed" religion while encouraging the replacement of superstition in our lives and in our ideas concerning God with innate God-given reason. Ethan Allen was an American Revolutionary War hero. He and his "Green Mountain Boys" captured Fort Ticonderoga from the British, thus securing much needed supplies and weapons for General George Washington and his rebels. Unfortunately, Allen was captured in his next engagement with British forces and spent years anguishing in British prison ships and in a British prison. After suffering greatly at the hands of his captors, he was freed through a prisoner exchange effort. When Allen was a young man he became friends with Thomas Young, a freethinking medical doctor who was a Deist (that is, he believed in God/The Supreme Intelligence based on the application of his reason on the designs and laws of Nature). Together they worked on Reason: The Only Oracle of Man. However, when the American Revolution started they went their separate ways to take part in and to support this world changing event. It wasn't until after the war and after Thomas Young died that Ethan Allen secured their manuscript for this book from Young's wife. Allen worked on it some more and finally had it printed in 1785. The logic based arguments Ethan Allen and Thomas Young put forward for the belief in God as well as against belief in the "revealed"/hearsay religions such as Judaism, Christianity and Islam, are very sound and life improving They greatly help the reader to realize that God is NOT the same as religion. This realization itself is priceless. Yet, this book contains countless examples of sound and strong reasoning which strengthens our belief in, as described in the Deistic document the Declaration of Independence, "Nature's God." It also contains many ideas which protect us from potentially dangerous unreasonable beliefs and ideas. All these years after the American Revolution, Ethan Allen and Thomas Young are still helping to make the world a better place via their book, Reason: The Only Oracle of Man.