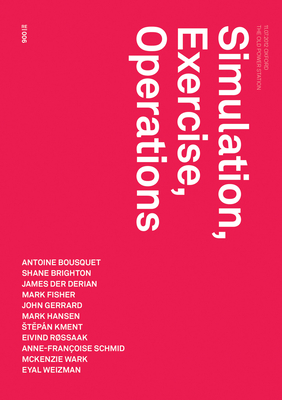 By Robin Mackay (Editor), Leon Krempel (Foreword by)
$12.95
Email or call for price.

This is book number 6 in the Urbanomic / Redactions series.

Collection of interventions on the status of the moving image in an age of advanced simulation, exploring the contemporary links between power, simulation, and warfare.

This collection of wide-ranging interventions and discussions on the status of the moving image in an age of advanced simulation explores the contemporary links between power, simulation, and warfare.

Today, technological simulation has become an integral part of military training and operations; and at the same time, media spectacle—often enabled by the same technologies—has become integrated with military power. Trained in virtual environments, army personnel are increasingly enhanced by augmented reality technologies that bring combat into conformity with its simulation. Equally, the seductions of media and entertainment have become crucial weapons for “information dominance.” At the same time as the infosphere demands that war takes on the properties of a game, hyper-realistic videogames evolved from military technology become a kind of virtual distributed training camp, as the lines between simulation and action, combatant and civilian, become blurred.

Based on a round table discussion prompted by the work of artist John Gerrard, Simulation, Exercise, Operations assembles thinkers from philosophy, media, and military theory to examine the powers of simulation in the contemporary world.

Robin Mackay is a philosopher, Director of the UK arts organization Urbanomic, and Associate Researcher at Goldsmiths University of London.

Robin Mackay is a philosopher, Director of the UK arts organization Urbanomic, and Associate Researcher at Goldsmiths University of London.

McKenzie Wark (she/her), awarded the 2019 Thoma Prize for writing in digital art, is the author of A Hacker Manifesto Gamer Theory, and The Beach Beneath the Street. Wark's correspondence with Kathy Acker was published by Semiotext(e) as I'm Very Into You.

Eyal Weizman is Professor of Spatial and Visual Cultures at Goldsmiths College, University of London and a Global Scholar at Princeton University. A founder of Forensic Architecture, he is also a founding member of the architectural collective DAAR in Beit Sahour/Palestine. His books include Mengele's Skull, The Least of All Possible Evils, and Hollow Land.

Mark B. N. Hansen is Professor of Literature at Duke University.