A Divine Language: Learning Algebra, Geometry, and Calculus at the Edge of Old Age (Hardcover) 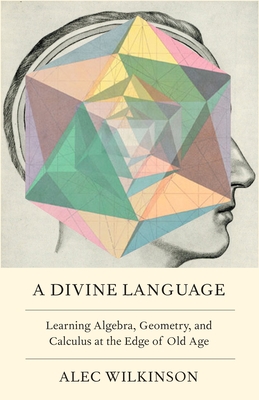 "Wilkinson has accomplished something more moving and original, braiding his stumbling attempts to get better at math with his deepening awareness that there’s an entire universe of understanding that will, in some fundamental sense, forever lie outside his reach." —Jennifer Szalai, The New York Times

"There is almost no writer I admire as much as I do Alec Wilkinson. His work has enduring brilliance and humanity.” —Susan Orlean, author of The Library Book

A spirited, metaphysical exploration into math's deepest mysteries and conundrums at the crux of middle age.

Decades after struggling to understand math as a boy, Alec Wilkinson decides to embark on a journey to learn it as a middle-aged man. What begins as a personal challenge—and it's challenging—soon transforms into something greater than a belabored effort to learn math. Despite his incompetence, Wilkinson encounters a universe of unexpected mysteries in his pursuit of mathematical knowledge and quickly becomes fascinated; soon, his exercise in personal growth (and torture) morphs into an intellectually expansive exploration.

In A Divine Language, Wilkinson, a contributor to The New Yorker for over forty years, journeys into the heart of the divine aspect of mathematics—its mysteries, challenges, and revelations—since antiquity. As he submits himself to the lure of deep mathematics, he takes the reader through his investigations into the subject’s big questions—number theory and the creation of numbers, the debate over math’s human or otherworldly origins, problems and equations that remain unsolved after centuries, the conundrum of prime numbers. Writing with warm humor and sharp observation as he traverses practical math’s endless frustrations and rewards, Wilkinson provides an awe-inspiring account of an adventure from a land of strange sights. Part memoir, part metaphysical travel book, and part journey in self-improvement, A Divine Language is one man’s second attempt at understanding the numbers in front of him, and the world beyond.

Alec Wilkinson is the author of many books, including The Ice Balloon, The Protest Singer, My Mentor, Mr. Apology, and The Happiest Man in the World. A contributor to The New Yorker since 1980, he is the recipient of a Guggenheim Fellowship, a Robert F. Kennedy Book Award, and a Lyndhurst Prize. He lives in New York City.

"[A Divine Language] isn’t a chipper story of personal growth — and for that I was grateful. Wilkinson has accomplished something more moving and original, braiding his stumbling attempts to get better at math with his deepening awareness that there’s an entire universe of understanding that will, in some fundamental sense, forever lie outside his reach." —Jennifer Szalai, The New York Times

"Keen-eyed, beguiling . . . Wilkinson is a beautiful writer, a dry wit who seamlessly blends complex ideas with jazzy anecdotes and the history of math itself . . . His book demystifies math, illuminating the godlike, immutable properties of proofs and the ways numbers evolve, like animal species. For readers craving high style during the dog days, A Divine Language is simply divine." —Hamilton Cain, StarTribune (Minnesota)

"A wide-ranging exploration of identity, philosophy, faith, the history of mathematics, and the nature of the divine . . . This is a deeply insightful, lyrical, and erudite work, filled with gems of wisdom and fascinating digressions, all characterized by Wilkinson's delightfully dry, self-deprecating humor. He proves it's never too late to learn something new, even if what you learn isn't what you expected." —Booklist (starred review)

"With his smooth writing, ingenious descriptions, and analogies, this motivational book should be a welcome gift to many readers who have spent decades avoiding math because of early frustrations with learning it in school . . . Suitable for all ages, this intelligent book on finding new ways to understand things will find eager and welcoming readers." —Library Journal (starred review)

"Inspiring reading for anyone seeking to overcome intellectual defeat in any realm." —Kirkus (starred review)

"[A] rollicking meditation on numbers . . . Wilkinson’s slyly entertaining prose captures both the frustrations of learning math and the rare exhilarations when it’s mastered. Readers who have stared blankly at a sheet of equations will find this odyssey a treasure." —Publishers Weekly

"There is almost no writer I admire as much as I do Alec Wilkinson. He’s an extraordinary reporter and a writer of such grace that his stories seem illuminated from within. His work has enduring brilliance and humanity.” —Susan Orlean, author of The Library Book

"With the easy charm of the distinguished New Yorker writer that he is, Alec Wilkinson takes us on an inspiring journey: first backward in time as he revisits his ninth-grade anxiety over algebra, then forward to his obsessive attempt, late in life, to scale the heights of calculus and reach toward a Platonic heaven of pure math. It's a journey full of "Fail better" lurches and setbacks--sometimes comical, sometimes poignant--enlivened by the author's personal brushes, along the way, with an eccentric gallery of mathematical geniuses. Reading it, you can't help thinking: Hey, I'm at the age where I should try something like that myself!" —Jim Holt, author of Why Does the World Exist?

“Alec Wilkinson, at a stage of life when most people have settled comfortably into an intellectual lane, decided to learn algebra, geometry, and calculus. A DIVINE LANGUAGE is the profound and refreshingly candid exploration of what happened when Wilkinson confronted the ideas that had defeated him decades before.” —Jordan Ellenberg, author of Shape: The Hidden Geometry of Information, Biology, Strategy, Democracy, and Everything Else

"When Alec Wilkinson, a superb writer of nonfiction prose, sets out to learn mathematics, he goes someplace that's adventurous and new for him and exhilarating for the reader. The elegant, timeless vistas of the Divine Language he skillfully describes correspond to symmetries deep in us all. I got a huge thrill from glimpsing the possibilities of my mind, and arrangements of the universe I hadn't suspected were there." —Ian Frazier, author of Cranial Fracking

"In A Divine Language, Alec Wilkinson proves himself a hero for our time, facing a great fear known to millions: math, specifically Algebra. Presenting himself in the way of a novice, he enters the mysterious world of numbers, learning the magic, mystery and backstory of numerical calculation. He takes us with him to a bewitched place where numbers drift by like autumn leaves. The writing is sharp, concise, bracing, beautiful and as clear as crystal. You will come away from this book with new insight and appreciation. You will see the world in a new way. And you will be smarter. Now who can tell me what X is?" —Rich Cohen, author of Pee Wees

"When I was young, I thought my difficulties with math had something to do with its utter opacity. I failed to realize that it had a great deal to do with my own lack of transparency, my inability to come to terms with myself. Alec Wilkinson, with no small difficulty of his own, has cleared this up for me, and for that I am truly grateful. If you have struggled with math—or with life—you should read this book." —John Kaag, author of Hiking with Nietzsche