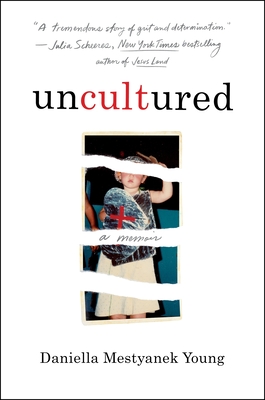 "A painful and propulsive memoir delivered in the honest tones of a woman who didn’t always think she’d live to tell her story." —The New York Times

A Buzzfeed Best Book of September

In the vein of Educated and The Glass Castle, Daniella Mestyanek Young's Uncultured is more than a memoir about an exceptional upbringing, but about a woman who, no matter the lack of tools given to her, is determined to overcome.

Behind the tall, foreboding gates of a commune in Brazil, Daniella Mestyanek Young was raised in the religious cult The Children of God, also known as The Family, as the daughter of high-ranking members. Her great-grandmother donated land for one of The Family’s first communes in Texas. Her mother, at thirteen, was forced to marry the leader and served as his secretary for many years. Beholden to The Family’s strict rules, Daniella suffers physical, emotional, and sexual abuse—masked as godly discipline and divine love—and is forbidden from getting a traditional education.

At fifteen years old, fed up with The Family and determined to build a better and freer life for herself, Daniella escapes to Texas. There, she bravely enrolls herself in high school and excels, later graduating as valedictorian of her college class, then electing to join the military to begin a career as an intelligence officer, where she believes she will finally belong.

But she soon learns that her new world—surrounded by men on the sands of Afghanistan—looks remarkably similar to the one she desperately tried to leave behind.

Told in a beautiful, propulsive voice and with clear-eyed honesty, Uncultured explores the dangers unleashed when harmful group mentality goes unrecognized, and is emblematic of the many ways women have to contort themselves to survive.

DANIELLA MESTYANEK YOUNG is an American author and speaker who was raised in the religious cult, Children of God. She later served as an intelligence officer for the US Army for over six years, making the rank of Captain, and became one of the first women in US Army history to conduct deliberate ground combat operations when she volunteered to serve on a Female Engagement Team. Daniella is also the recipient of the Presidential Volunteer Service Medal. Daniella lives with her husband and daughter in Maryland, and is a candidate for a Master’s degree in Industrial and Organizational Psychology from the Harvard Extension School.

"A painful and propulsive memoir delivered in the honest tones of a woman who didn’t always think she’d live to tell her story." —The New York Times

"Mestyanek Young searingly captures the fear and intensity that were her constant companions in the Children of God, and she draws smart parallels between the dogmatic 'indoctrination' she encountered in both the cult and the Army . . . Readers won’t be able to put down this harrowing and enthralling memoir."
—Publishers Weekly (starred)

“Affecting … and a deft portrait of the dangers of blindly following leaders of whatever stripe.” —Kirkus Reviews

"Unflinching and powerful . . . a story of resilience and survival that will stay with you long after you finish." —Buzzfeed

“Uncultured vividly cautions readers to choose a group in which you can be yourself—and be free.” —Bookpage (starred)

"Daniella Mestyanek Young’s searing memoir elegantly and intricately intertwines the worlds of religious cult and military, brilliantly displaying their similarities in a way that is as undeniable as it is disturbing. It is a brutal, necessary look at the inherent ways institutions attempt to confine women to limiting roles. Ultimately, it’s a story of resilience and Mestyanek Young’s ability to place one boot in front of the other in the face of the unimaginable."
—Ryan Leigh Dostie, author of Formation and US Army veteran

"Page-turner is an understatement for Daniella Mestyanek Young's Uncultured, a gripping memoir of resilience, courage, grief, and the hope that comes when a woman knows her true worth."
—Rev. Dr. Angela Yarber, award-winning author of Queering the American Dream

"Uncultured is brutally honest . . . the unrelenting, innate resiliency that Daniella brings to life from a very early age makes us consider “Where does resiliency come from?” Her resolve to break her captor’s chains, whether in the Children of God, the US Army or her personal relationships is at the heart of this well-written and engaging memoir."
—Tammy Smith, Major General, US Army (Retired)

"Uncultured gives readers the page-turning of a thriller with the heart and exploration of a memoir.”
—New York Times bestselling author Taylor Stevens

"Powerful. Gripping. Sobering. Hopeful. I couldn’t put it down. Uncultured is not only a memoir, but a cautionary tale for our time—and all times. In the end, we understand the resilience of the human spirit . . . how, despite the worst circumstances of our pasts, we are not prisoners to them."
—Ruth E. Van Reken, co-author of Third Culture Kids and co-founder of Families in Global Transition

"This book is a must-read that exposes the rampant and horrifying abuse of children raised in cults—and the unimaginable strength and courage of those children, like Daniella, who get out and survive and eventually thrive. With clarity, honesty and heartfelt emotion, she educates us not only about cults, but also about the similarities of coercive control in some of our most respected social institutions."
—Janja Lalich, Ph.D., professor and author of Take Back Your Life: Recovering from Cults and Abusive Relationships