Butler to the World: The Book the Oligarchs Don't Want You to Read - How Britain Helps the World's Worst People Launder Money, Commit Crimes, and Get Away with Anything (Hardcover) 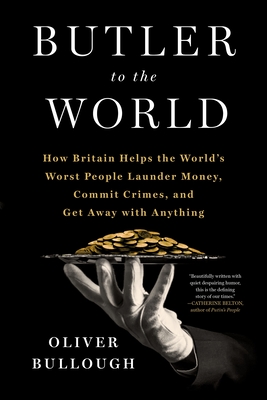 In his forceful follow-up to Moneyland, Oliver Bullough unravels the dark secret of how Britain placed itself at the center of the global offshore economy and at the service of the worst people in the world.

The Suez Crisis of 1956 was the nadir of Britain's twentieth century, the moment when the once-superpower was bullied into retreat. "Great Britain has lost an empire and not yet found a role," said Dean Acherson, a former US secretary of state. Acheson's line has entered into the canon of great quotations: but it was wrong. Britain had already found a role. The leaders of the world just hadn't noticed it yet.

Butler to the World reveals how Britain came to assume its role as the center of the offshore economy. Written polemically, but studded with witty references to the butlers of popular fiction, it demonstrates how so many elements of modern Britain have been put at the service of the world's oligarchs.

The Biden administration is putting corruption at the heart of its foreign policy, and that means it needs to confront Britain's role as the foremost enabler of financial crime and ill behavior. This book lays bare how London has deliberately undercut U.S. regulations for decades, and calls into question the extent to which Britain can be considered a reliable ally.

Oliver Bullough is the author of non-fiction books on Russian history and politics: The Last Man in Russia, and Let Our Fame Be Great, which was shortlisted for the Orwell Prize in the UK and won the Cornelius Ryan in the US.

Bullough is a writer for the Guardian, and his work has been published by British GQ, The New York Times, and the BBC. He lives in London.

“Urgent and essential reading…Bullough has drilled down to the root of the malaise that's rotting the UK system. Beautifully written with quiet despairing humor, this is the defining story of our times.” —Catherine Belton, author of Putin’s People

“Not only a witty and well researched economic history of Britain's role as financial Butler to the world, this is also a savage analysis of Britain's soul. As essential as Orwell at his best.” —Peter Pomerantsev, author of This Is Not Propaganda

“If like me you've ever wondered what all those university graduate schemes were ultimately about, Bullough outlines it here...Timely and revealing.” —Lucy Prebble, writer and executive producer of Succession

“A horribly brilliant account of just how much historical integrity Britain has sacrificed at the altar of dirty money. Bullough is a compelling and expert guide to the newly-dug sewers flowing through the heart of our political, legal and financial establishment.” —James O'Brien, author of How Not to be Wrong

“This is an absolute must-read for everyone who wants to understand Britain's crucial role in the global dirty money crisis…Bullough lifts the lid and explains in a very clear and intelligible way why and how Britain is facilitating illicit finance across the world. The narrative is gripping, the analysis original and powerful and the detailed examples terrifying. This book will provide a powerful contribution to the important debate on the UK and dirty money.” —Margaret Hodge, MP and chair of the Public Accounts Committee

“Oliver Bullough unsparingly reveals the devastating facts behind Britain's dirty financial secrets and moral guilt while directly challenging the UK to clean up its act. This book is a must-read for those who care about our reputation in the world today.” —Andrew Mitchell, MP and former British international development minister

“Anyone who cares about the future of this country should read this sizzlingly written and incendiary story…This book blows apart Britain's image of gentlemanly respectability and lays bare the real picture: ruthless greed disguised by hypocrisy, and tolerated because of willful ignorance.” —Edward Lucas, author of The New Cold War

“The shocking revelation of how the old heart of an unscrupulous empire turned into a fawning servant to the global super-rich. The sooner more people realize this, the better.” —Danny Dorling, author of Rule Britannia

"Couldn’t be timelier... A stinging case for developing a regulatory regime to force the U.K. 'to seek a different way to earn a living.’” —Kirkus

"Impressively detailed…Lucid explanations of complex financial matters and a simmering sense of outrage distinguish this timely investigation into how Britain sacrificed its principles for pounds.” —Publishers Weekly

“Highly readable... deserve[s] praise for going beyond moralizing and pointing out how an industry geared to enabling the corrupt is not just unsavory but can hurt a country's real economic prospects.” —Financial Times

“An urgent account of Britain's history of welcoming corrupt capital...Mr. Bullough argues compellingly that though more anti-corruption funds and tougher enforcement are welcome, what is really needed is a change of philosophy: for principles to take precedence over the profits of a few.” —The Economist

"In Bullough’s enthralling book he charts just how London sought to find its place in a post-Suez Crisis world and in so doing opened the doors to dodgy money...all at the expense of the British people and the countries the money came from." —Diplomatic Courier