Confessions of a Single Mum: What It's Like When You're Expecting The Unexpected (Paperback) 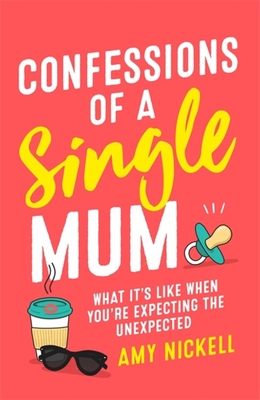 When Amy Nickell left university, she managed to nab herself a real life paid job as a celebrity reporter in London town. She literally got paid to ask Robert Downey Junior out for Nando's, while living with her gay best friend, their Harry Styles cardboard cutout and their pet toad, Snoop Frog, and drank prosecco way before it was in fashion. Things were good, they were fun, they definitely weren't serious. However, that life took a very grown up, very serious detour when Amy found herself expecting the unexpected and pregnant age 24. Pregnant and without a boyfriend. And so her life took on an altogether new direction...

Here in Confessions of a Single Mum, Amy debunks single mum myths, delves into the world of dating (nothing ruins sexy sofa snogging ambience like the watchful eye of Daddy Pig), going back to work just ten days after giving birth, lactating WAY too close to Simon Cowell, as well answering the questions that come with having a family that is anything but nuclear.

Amy's wonderfully frank, honest and hilarious story will inspire other parents to own their single status as well as anyone whose life has thrown them a curveball.

Amy Nickell is a journalist and whether she is oversharing in newspapers and magazines, such as the Metro, the Guardian and Grazia, or in front of the camera offering Jennifer Aniston Doritos, she's never taken a standard approach. But the real surprise came when Amy discovered she was pregnant and without a boyfriend. Despite the bad press, unplanned pregnancy and single parenthood didn't ruin her life and she's been writing and talking about it ever since including appearances on Good Morning Britain and BBC Radio 4's Woman's Hour. She now lives in Berkhamsted, Hertfordshire with her son Freddy who is now three and her partner, Oliver. Her favourite Spice Girl is Geri and she eats one avocado every day.