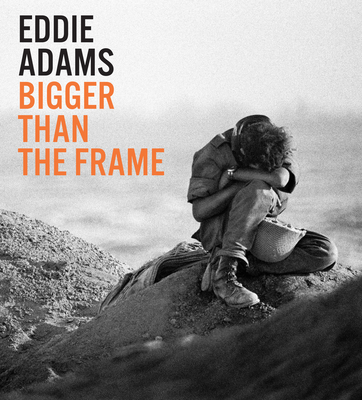 By Eddie Adams, Don Carleton (Introduction by)
$60.00
Email or call for price.

Best-known for Saigon Execution, his Pulitzer Prize–winning photograph that forever shaped how the world views the horrors of war, Eddie Adams was a renowned American photojournalist who won more than five hundred awards, including the George Polk Award for News Photography three times and the Robert Capa Gold Medal. During his fifty-year career, he worked as a staff photographer for the Associated Press, Time, and Parade, and his photos appeared on more than 350 magazine covers. Adams is also famous and deeply respected for founding the Eddie Adams Workshop, an intensive photography seminar whose graduates include twelve Pulitzer Prize–winners and many others who have achieved illustrious careers in journalism, commercial photography, and media.

Eddie Adams presents a career-spanning selection of the photographer’s finest work from the 1950s through the early 2000s, drawn from the Eddie Adams Photographic Archive at the Dolph Briscoe Center for American History at the University of Texas at Austin. In addition to his much-praised Vietnam War photography, the book includes images that uncannily reflect world and domestic issues of today, including immigration, conflict in the Middle East, and the refugee crisis. All of them attest to Adams’s overwhelming desire to tell people’s stories. As he once observed, “I actually become the person I am taking a picture of. If you are starving, I am starving, too.” Accompanying the images are an essay by internationally acclaimed photography curator Anne Wilkes Tucker, a personal remembrance by Adams’s widow Alyssa Adams, a foreword by Briscoe Center director Don Carleton, who provides a concise history of Adams’s career, and a timeline.

EDDIE ADAMS (1933–2004) The only Associated Press photographer to hold the title of special correspondent, Adams photographed thirteen wars, six US presidents, many heads of state, and countless celebrities. He recorded many significant events in the second half of the twentieth century, creating photographs that influenced public opinion and changed policy; his series on Vietnamese boat people, “Boat of No Smiles,” influenced the United States to admit 200,000 Vietnamese refugees at the end of the war. Many of Adams’s images continue to provoke discussion and debate to this day.

ANNE WILKES TUCKER Hailed as “America’s Best Curator” by Time magazine, Tucker served as the Gus and Lyndall Wortham Curator at the Museum of Fine Arts, Houston, where she built the photography collection and organized more than forty exhibitions.

"[The book] is a valuable contribution to the history and practice of photojournalism that warrants space on any visual communications' instructor's bookshelf."
— American Journalism: A Media History Journal