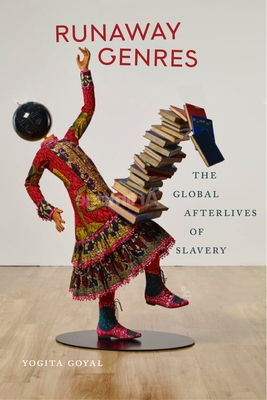 Winner, 2021 Barbara Perkins and George Perkins Award, given by the International Society for the Study of Narrative Honorable Mention, 2020 James Russell Lowell Prize, given by the Modern Language Association
Argues that the slave narrative is a new world literary genre In Runaway Genres, Yogita Goyal tracks the emergence of slavery as the defining template through which current forms of human rights abuses are understood. The post-black satire of Paul Beatty and Mat Johnson, modern slave narratives from Sudan to Sierra Leone, and the new Afropolitan diaspora of writers like Teju Cole and Chimamanda Ngozi Adichie all are woven into Goyal's argument for the slave narrative as a new world literary genre, exploring the full complexity of this new ethical globalism. From the humanitarian spectacles of Kony 2012 and #BringBackOurGirls through gothic literature, Runaway Genres unravels, for instance, how and why the African child soldier has now appeared as the afterlife of the Atlantic slave. Goyal argues that in order to fathom forms of freedom and bondage today--from unlawful detention to sex trafficking to the refugee crisis to genocide--we must turn to contemporary literature, which reveals how the literary forms used to tell these stories derive from the antebellum genre of the slave narrative. Exploring the ethics and aesthetics of globalism, the book presents alternative conceptions of human rights, showing that the revival and proliferation of slave narratives offers not just an occasion to revisit the Atlantic past, but also for re-narrating the global present. In reassessing these legacies and their ongoing relation to race and the human, Runaway Genres creates a new map with which to navigate contemporary black diaspora literature.

Yogita Goyal is Professor of African American Studies and English at UCLA, author of Romance, Diaspora, and the Black Atlantic Literature and the editor of the Cambridge Companion to Transnational American Literature. She edits the journal Contemporary Literature and is President of the Association for the Study of the Arts of the Present (A.S.A.P.).