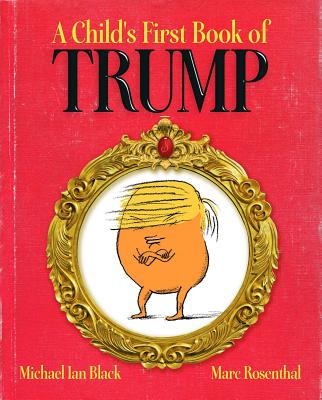 What do you do when you spot a wild Trump in the election season? New York Times bestselling author and comedian Michael Ian Black has some sage advice for children (and all the rest of us who are scratching our heads in disbelief) in this perfectly timely parody picture book intended for adults that would be hysterical if it wasn’t so true.

The beasty is called an American Trump.
Its skin is bright orange, its figure is plump.
Its fur so complex you might get enveloped.
Its hands though are, sadly, underdeveloped.

The Trump is a curious creature, very often spotted in the wild, but confounding to our youngest citizens. A business mogul, reality TV host, and now…political candidate? Kids (and let’s be honest many adults) might have difficulty discerning just what this thing that’s been dominating news coverage this election cycle is. Could he actually be real? Are those…words coming out of his mouth? Why are his hands so tiny? And perhaps most importantly, what on earth do you do when you encounter an American Trump?

With his signature wit and a classic picture book style, comedian Michael Ian Black introduces those unfamiliar with the Americus Trumpus to his distinguishing features and his mystifying campaign for world domination…sorry…President of the United States.

Michael Ian Black is a writer, comedian, and actor who has appeared on Another Period, The Jim Gaffigan Show, and Wet Hot American Summer: First Day of Camp. He created and starred in many television series, has written screenplays, and regularly tours the country as a stand-up comedian. Michael is the bestselling author of the book My Custom Van, the memoir You’re Not Doing It Right, and the children’s books Chicken Cheeks, The Purple Kangaroo, A Pig Parade Is a Terrible Idea, I’m Bored, Naked!, Cock-a-Doodle-Doo-Bop!, and I’m Sorry. Michael lives in Connecticut with his wife and two children.

Marc Rosenthal is the New York Times bestselling illustrator of many books for children, including Small Walt by Elizabeth Verdick; the Bobo series by Eileen Rosenthal; The Straight Line Wonder by Mem Fox; and Phooey!, which he wrote. Marc’s illustrations can be seen regularly in The New Yorker, Time, Forbes, Fortune, The Atlantic, The New York Times, The Boston Globe, The Washington Post, and others. Visit him online at Marc-Rosenthal.com.