Almost Yankees: The Summer of ’81 and the Greatest Baseball Team You’ve Never Heard Of (Hardcover) 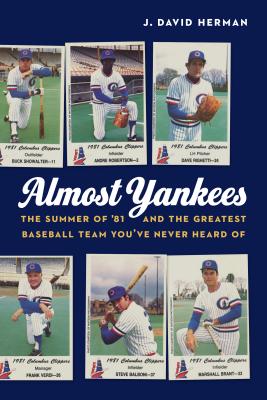 By J. David Herman
$29.95
Currently Not Available In Store - Usually Available for Shipping or Curbside Pickup in 1-5 Days

Almost Yankees is a poignant and nostalgic narrative of the lives and travails of Minor League Baseball, focusing on the 1981 championship season of the New York Yankees’ Triple-A farm club, the Columbus Clippers. That year was especially notable in the annals of baseball history as the year Major League Baseball went on strike in midseason. When that happened, the Clippers were suddenly the best team in baseball and found themselves the focus of national media attention. Many of these Minor Leaguers sensed this was their last, best chance to make an impression and fulfill their dreams to one day reach the majors.

The Clippers’ raw recruits, prospects, and Minor League veterans responded to this opportunity by playing the greatest baseball of their lives on the greatest team most of them would ever belong to. Then the strike ended, leaving them to return to their ordinary aspirational lives and to be just as quickly forgotten.

Almost Yankees is the previously untold baseball story of a team and its players performing in the shadow of one of the sport’s most famous teams and infamous owners. Featuring interviews with more than thirty former players (including Steve Balboni, Dave Righetti, Buck Showalter, and Pat Tabler) and dozens of other baseball and media figures, this season’s narrative chronicles success, failure, resilience, and redemption as told by a special group of players with hopes and dreams of big-league glory. J. David Herman, who worshipped the team as an eleven-year-old, tracked down his old heroes to learn their stories—and to better understand his own. The season proved to be a launching pad for some, a final chance for others, and the end of the dream for many others.

J. David Herman is a former newspaper sports writer who joined MSNBC.com to assist with coverage of the 2000 Summer Olympics. He stayed on as a news producer and later became a lead editor for Olympics.com during the 2002 Winter Olympics. He has worked at MSN.com in numerous roles over the past sixteen years, including his current position as a senior managing editor for Microsoft News.

"Herman . . . recalls the magical season in this part memoir, mostly baseball history destined to become a baseball classic. . . . Using interviews, books, newspapers, and a range of other primary sources, Herman weaves a fascinating saga filled with humorous and tragic events of the era and is at his best recalling off the field stories. . . . A lively grand slam that will win over all sports fans, and anyone interested in a story well told."—Boyd Childress, Library Journal
— Boyd Childress

"Almost Yankees is Herman's look back at a team that was lost to him, and to many outside of its Columbus rooters. Now, both for him and especially for fans of that Yankees dynasty but really for anyone who likes stories of minor league ball in a bygone era, it's found again."—Jerry Milani, Gotham Baseball
— Jerry Milani

"Almost Yankees is one of the best books ever written about minor league baseball."—Mike Shannon, Minor Trips Digest
— Mike Shannon

"Almost Yankees, featuring interviews with 28 of the team's 36 players, is a well-researched and well-written labor of love."—Benjamin Hill, MILB.com
— Benjamin Hill

“Columbus discovered America. David Herman discovered Columbus. What Herman, a great explorer in his own right, found was a cherished boyhood filled with baseball. Heroes. Homers. Memories. It’s pure Americana. Herman takes us back in time and lets us share in his life-changing summer. It’ll make you feel good.”—Dan Raley, author of Pitchers of Beer: The Story of the Seattle Rainiers
— Dan Raley

“I was there, in Columbus working at Franklin County Stadium during the summer of 1981. Reading J. David Herman’s Almost Yankees is like sitting with an old friend, going over old times and telling stories of a time when baseball was still a game, the summer full of magic, and each of us, in our own way, still dreamed of making the major leagues. Almost Yankees is a book for anyone who has ever fallen in love with baseball.”—Glenn Stout, author of Young Woman and the Sea and series editor of The Best American Sports Writing
— Glenn Stout

“Almost Yankees is amazing. Thanks to J. David Herman for reminding me of one of the greatest years of my life in baseball through his words and stories in this book.”—Rick Rizzs, radio voice of the ’81 Columbus Clippers and longtime Seattle Mariners broadcaster
— Rick Rizzs