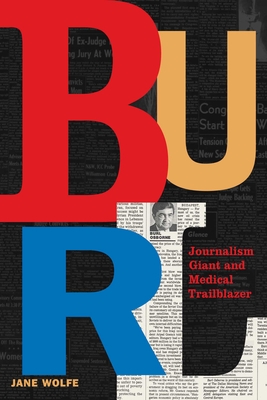 The riveting biography of Burl Osborne, former chairman of The Associated Press and publisher of The Dallas Morning News, who waged and won one of the last great newspaper wars in the U.S.

Burl is the story of one man’s unlikely rise from the coal mines of Appalachia to the pinnacle of journalism. After being diagnosed with a fatal kidney disease as a child, Burl Osborne pioneered home dialysis treatment and became the 130th person to undergo a live kidney transplant in 1966—then an unproven, high-risk operation.

While managing his challenging illness, Burl distinguished himself early as a writer and reporter with The Associated Press, eventually rising to the top of the wire service’s executive ranks. Then, against the advice of his colleagues and the newspaper’s own doctors, he sought an even greater challenge: joining The Dallas Morning News to lead the fight in one of America’s last great newspaper wars.

Throughout his life and career, he garnered respect from business and political leaders, reporters, editors, and publishers around the country. Burl thrusts readers into the improbable and remarkable life of a man at the forefront of both medicine and a golden age of journalism.

Burl Osborne was a man of talent, determination, and courage against obstacles. All those qualities are reflected in this book. He was a friend and valued colleague—a man I admired.
(Walter R. Mears, Associated Press reporter for forty-five years and Pulitzer Prize-winning journalist)

"Wolfe (The Murchisons) does justice in this comprehensive biography to the inspiring life of journalist Burl Osborne (1937–2012), who during his career led both the Associated Press and the Dallas Morning News. Born in a Kentucky coal camp, Osborn suffered a bad case of strep throat at age six, wasn’t expected to survive his teen years, and suffered kidney disease, eventual failure, and frequent dialysis. He nevertheless overcame the odds and enrolled in college in 1956, where a chance question from a professor—“Anybody here want to be a cub reporter?”—sparked his career. In 1957, he joined The Ashland Daily Independent, which led to his job at the AP. He climbed the ladder, becoming managing editor in 1977 and being elected chairman by 2001. Meanwhile, his tenure at the Dallas Morning News, which started in 1980, was so successful it ran its city rival out of business. Photos and excerpts from Osborne’s own writing bring his colorful personality to life: he captured the nation’s attention, for example, with reports on a man in West Virginia who nearly lost his dog in a mine shaft but emerged “half laughing and almost crying as he carried his 3-year-old rabbit hound off the mountain.” The result is a moving testament to a consequential figure." (Publishers Weekly)

Burl was wildly unique . . . I’ve never met anyone in the media business like him. He was the real deal.
(Morton H. Meyerson, former executive of Electronic Data Systems and current chairman of 2M Companies, Inc)

Today, more than ever, America needs more Burl Osbornes . . . tough, demanding but compassionate, a fighter, a competitor, and a newsman committed to reporting the news in a balanced, honest,
and fair manner.
(Dolph C. Simons, Jr., editor of The Lawrence Journal-World and chairman of the World Company)

Burl served on the board of CPJ for fifteen years . . . [He] had an uncanny ability to identify the key issues, ask the relevant questions, and build a consensus around an informed decision. It was a marvel
to watch him work . . . His service contributed enormously to . . . the defense of persecuted journalists around the world seeking to bring the truth to light.
(Joel Simon, executive director of the Committee to Protect Journalists)