A Death on W Street: The Murder of Seth Rich and the Age of Conspiracy (Hardcover) 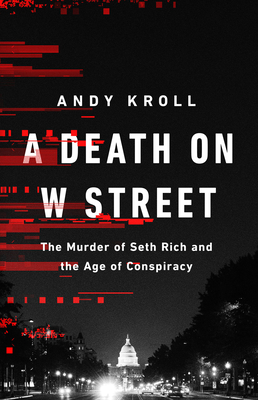 A true-crime story for the post-truth era

In the early hours of July 10, 2016, gunshots rang out and a young man lay fatally wounded on a quiet Washington, DC, street. But who killed Seth Rich? When he was buried in his hometown, his rabbi declared: “There are no answers for a young man gunned down in the prime of his life.” The rabbi was wrong. There were in fact many answers, way too many.

In the absence of an arrest, a howling mob filled the void. Wild speculation and fantastical theories surfaced on social media and gained traction thanks to a high-level cast of provocateurs. But it wasn’t until Fox News took the rumors from the fringes to the mainstream that Seth Rich’s life and death grew into something altogether unexpected—one of the foundational conspiracy theories of modern times.

A Death on W Street unravels this gripping saga of murder, madness, and political chicanery, one that would ensnare Hillary Clinton and Steve Bannon, a popular pizzeria in northwest DC and the most powerful voices in American media. It's the story of an idealistic twenty-seven-year-old political staffer who became a tragic victim of the culture wars, until his family decided that they had no choice but to defend his name and put an end to the cruel deceptions that surrounded his death.

This is the definitive story of Seth Rich, of those who tried to weaponize his memory in a war of words unlike any other, and of one family’s crusade to protect the truth against all odds.

Andy Kroll is an investigative reporter for ProPublica, where he covers voting, politics, and threats to democracy. He is the former Washington bureau chief for Rolling Stone magazine, where he wrote extensively about the Seth Rich case. He has also written for Mother Jones, National Journal, and The California Sunday Magazine. He lives in Washington, DC. This is his first book.

"What Kroll deftly does is not just trace the growth of this absurd allegation and of course debunk it, but he brings to life the idealistic and admirable Rich and the love he had for his family and friends."—Air Mail

“Thoroughgoing, riveting narrative…An exemplary investigation, exactly as the author describes it: ‘a true-crime story for the post-truth era.’”—Kirkus, starred review

"An incredibly well-told tale... very humane and empathetic and also very provocative."—Chris Hayes, MSNBC’s Why is This Happening podcast

“In Kroll’s new book, he chronicles Rich’s real life and death, as well as the dark forces that interrupted his family’s grief and made their tragedy into an online fascination and a hideous, dangerous distortion of reality.”—CrimeReads, Best New True Crime Books Out Now

“A Death on W Street is a brutal look at the damage a lie can do to people’s lives as well as to institutions that we, as Americans, revere—or at least should revere.”—New York Journal of Books

“The superbly talented Andy Kroll is right when he calls the Seth Rich case a ‘skeleton key’ to a darkening political landscape. Kroll’s vivid, gripping account of the manipulation of one man’s death by conspiracy-mongers, including people in Donald Trump’s inner circle, exposes a sinister undercurrent in American life that has now taken on frightening power.”—Adam Hochschild, author of King Leopold’s Ghost

“This is truly a sad story—because of the death of good, young person, but mostly because of the death of an idea of rational and civil discussion in our society, replaced by insane conspiracy-mongering and by constant provocation. You will understand more about how we got to this place when you finish this powerful volume.”—Bill McKibben, author of The Flag, The Cross, and the Station Wagon

“Kroll has long been a reporter to watch in Washington, but his book A Death on W Street, announces him as a masterful longform storyteller, too. He’s written a compulsive and cautionary horror story about America’s descent into conspiracies, lies, and indecency. Part murder mystery, part political thriller, Kroll exposes those behind the spread of viral falsehoods, including Fox News, and describes the awful damage these lies inflict on the individuals besmirched, as well on democracy itself.”—Jane Mayer, chief Washington correspondent, The New Yorker Magazine

“Seth Rich was murdered. Then his life was stolen, hijacked by online conspiracy-mongers, right-wing opportunists, and clownish connivers who disfigured his memory and tormented his loved ones. In the anguished tale of the Rich family, and their pursuit of justice for their son, Kroll deftly unspools the master narrative of our troubled and paranoid era, in which lies and disinformation have trumped the truth. Engrossing and eye-opening, A Death on W Street is tenaciously reported and deliciously crafted—an essential read for those seeking to understand how we got here and where we are headed.”—Daniel Schulman, author of the New York Times-bestseller Sons of Wichita

“Masterful reporting, inspired thinking and writing, a narrative that does not flinch from entering the disturbed soul of an America hijacked by conspiracy theory. I cannot think of a more vital book for our unsettled times.”—Mark Arax, bestselling author of The Dreamt Land and West of the West