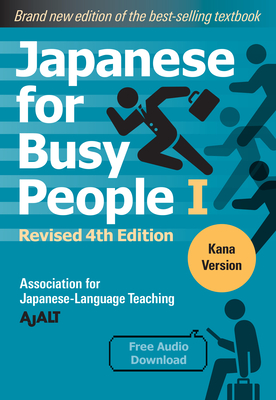 4th Revised Edition of JAPANESE FOR BUSY PEOPLE, the most popular Japanese language textbook series in the world.

Since it was first published in 1984, the focus of the Japanese for Busy People series has always been to teach Japanese for effective communication.

As suggested in the title, this is a concise course for busy students who want to learn natural, spoken Japanese as efficiently as possible in a limited amount of time.

The new Japanese for Busy People: Revised 4th Edition is made up of three volumes: Book I, Book II, and Book III. Book I is available in both romanized and kana versions, similar to the Revised 3rd Edition.

The Kana Version is exactly the same as the Romanized Version except for the scripts used throughout the book: hiragana and katakana.

The Kana Version is therefore recommended for those who have already learned kana (as these scripts are collectively called) or are learning them with Japanese for Busy People Kana Workbook or another such text. Studying Japanese in kana, rather than in romanized script, can lead to fluent pronunciation and facilitate a smooth transition to the study of kanji.

The Association for Japanese-Language Teaching (AJALT) was recognized as a nonprofit organization by the Japanese Ministry of Education in 1977. It was established to meet the practical needs of people who are not necessarily specialists on Japan but who wish to communicate effectively in Japanese. In 1992, AJALT was awarded the Japan Foundation Special Prize; and in 2010, it became a public interest incorporated association. AJALT created the best-selling Japanese for Busy People series, as well as the Japanese for Young People series, both published by Kodansha USA Publishing. AJALT’ s website is www.ajalt.org.