The Critique of Judgment (Great Books in Philosophy) (Paperback) 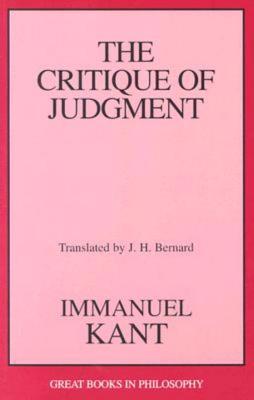 Considered by Kant to be the culmination of his critical philosophy, "The Critique of Judgement" was the last work in the trilogy begun with "The Critique of Pure Reason" and continued with "The Critique of Practical Reason". In this work Kant seeks to establish the a priori principles underlying the faculty of judgement, just as he did in his previous analyses of pure and practical reason. The first part deals with the subject of our aesthetic sensibility; we respond to certain natural phenomena as beautiful, says Kant, when we recognise in nature a harmonious order that satisfies the mind's own need for order. The second half of the critique concentrates on the apparent teleology in nature's design of organisms, i.e., organisms display a complex inter-working of parts, which are subordinated as means to serve the purpose of the whole. All of this suggests, concludes Kant, that our minds are inclined to attribute a final purpose to nature's design and to life as a whole. This natural tendency to see purpose in nature is the main principle underlying all of our judgements. Although this might imply a super-sensible Designer behind nature and a theistic interpretation of the world, in the final analysis Kant maintains an agnostic stance. Ever the objective philosopher he insists that though we are predisposed to read design and purpose into nature, we cannot therefore prove a supernatural dimension or the existence of God. Such considerations are beyond reason and are solely the province of faith.

IMMANUEL KANT, born in Königsberg, East Prussia (in what is now Kaliningrad, Russia), on April 22, 1724, was reared by parents who were members of the Lutheran sect known as Pietists. Though his upbringing was religious, Kant did not find himself subjected to a dogmatic or doctrinaire home environment. After completing his early education at the Collegium Fridericianum, he entered the University of Königsberg in 1740 at the age of sixteen. Though it was originally thought that he would make the ministry his life’s pursuit, Kant took the minimum number of required courses in theology and then dedicated himself to philosophy, mathematics, and physical science. During the years between 1746 and 1755 he worked as a private tutor in an effort to support himself through graduate work after the death of his parents left him without financial assistance. Receiving his doctorate in 1755, he taught at the University of Königsberg for fifteen years until 1770 when he was finally promoted to Professor of Logic and Metaphysics. Kant held this position until his death on February 12, 1804.

Among Kant’s most important philosophical works are: The Critique of Pure Reason (1781), Prolegomena to Any Future Metaphysics (1783), Idea for a Universal History (1784), Fundamental Principles of the Metaphysic of Morals (1785), Metaphysical Foundations of Natural Science (1786), Critique of Practical Reason (1787), Critique of Judgment (1790), Religion within the Limits of Reason Alone (1793), Perpetual Peace (1795), Metaphysics of Ethics (1797), and Anthropology from a Pragmatic Point of View (1798).