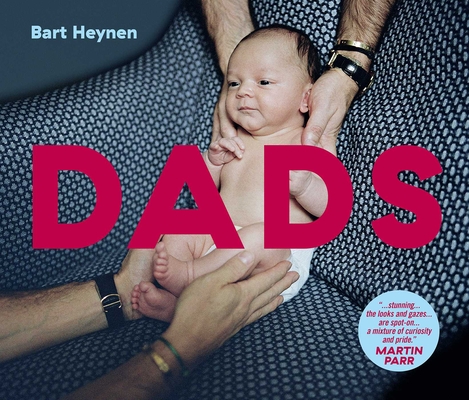 Featuring more than 40 families, DADS is a journey into Gay Fatherhood in the United States.

Dads is a journey into gay fatherhood in the United States. More than 40 families are portrayed by the Belgian photographer Bart Heynen. A very diverse group of dads who have one thing in common; they are gay and they have children.

Ever since 2015, when same-sex marriage became legal in across the U.S., we've witnessed a baby boom in the gay community. From New York City to Utah all these fathers are at the very beginning of a new era for gay men. Through adoption or the help of surrogates and egg donors they are able to make their dream come true and start a family of their own.

Beautifully printed and bound in Italy by famed Editoriale Bortolazzi Stei (EBS) to reproduce Heynen's portraits with the utmost quailty, Dads sheds a light on the daily lives of these families. The constant tension between how these families are unique and similar to straight families, makes this book a true page turner.

As the babies grow into adults and the fathers grow older throughout the book, we  are reminded that families come in many different sizes, colors and shapes. To say it in the words of Harvey Fierstein: ‘Love, commitment, and family are not heterosexual experiences, not heterosexual words, they are human words and they belong to all people.’

“A stunning portrait of dads with their babies…The looks and gazes on the faces of both the babies and dads is spot on – a mixture, of curiosity and pride.” -Martin Parr

Bart Heynen grew up in Belgium. He received a Master of Arts degree at the Vrije Universiteit Brussel and studied photography at the International Center of Photography in New York City. He works as a freelance photographer and lives with his husband and twin boys in New York City. Dads is his third monograph and first publication in the United States. Waterlanders (2011) and Slapers (2016) were published in Europe.

“Mr. Rousseau said he gives Mr. Heynen “a lot of credit” for including a father like him — a single dad in his 60s — since he said there is often a lack of representation of older gay people in art and media, which tends to focus on young, fit men.”
— David Dodge

"Heynen’s journey into gay fatherhood in the United States follows the evolution of these simple acts of love over time: as the babies grow into adults and the fathers grow older throughout the book, we are reminded that families come in many different sizes, colors, and shapes."
— Di Rica Cerbarno

“Heynen and his husband were living with their two children in New York when he felt the need to foster a sense of community.”
— NBC News

“I felt an instant connection with most of these families, though, because you share this bond with one another—this same plight in life.”
— W Magazine

“They did not adopt as a couple. That was not possible because they were not married.”
— The Guardian

“What he found as the project progressed was a complete rejection of the traditional gender roles performed in many two-parent heterosexual homes.”
— i-D Magazine

“Fatherhood is separate from your sexuality and that's what makes it so beautiful.”
— De Tijd

“My approach taught me the art of listening which helped me to get closer to people to photograph them.”
— La Photographie

“Dads, published by powerHouse Books is a work of compelling human interest, allowing us a view into the lives of a diverse range of families.”
— Dazed Magazine