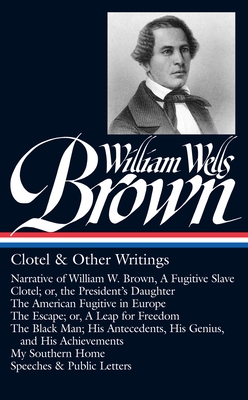 By William Wells Brown
$40.00
Email or call for price.

A showcase of the extraordinary career America’s first Black novelist and pivotal figure in African American literature: “It is difficult to imagine any one of his contemporaries who contributed as much or as richly to so many genres” (Henry Louis Gates Jr.)

Born a slave and kept functionally illiterate until he escaped at age nineteen, William Wells Brown (1814–1884) refashioned himself first as an agent of the Underground Railroad, then as an antislavery activist and self-taught orator, and finally as the author of a series of landmark works that made him, like Frederick Douglass, a foundational figure of African American literature. His controversial novel Clotel; or, the President’s Daughter (1853), a fictionalized account of the lives and struggles of Thomas Jefferson’s black daughters and granddaughters, is the first novel written by an African American.

This Library of America volume brings it together with Brown’s other groundbreaking works: Narrative of William W. Brown: A Fugitive Slave, Written by Himself (1847), his first published book and an immediate bestseller, which describes his childhood, life in slavery, and eventual escape; later memoirs charting his life during the Civil War and Reconstruction; the first play (The Escape; or, A Leap for Freedom, 1858), travelogue (The American Fugitive in Europe, 1855), and history (The Black Man, His Antecedents, His Genius, and His Achievements, 1862) written by an African American; and eighteen speeches and public letters from the 1840s, 50s, and 60s, many collected here for the first time.

LIBRARY OF AMERICA is an independent nonprofit cultural organization founded in 1979 to preserve our nation’s literary heritage by publishing, and keeping permanently in print, America’s best and most significant writing. The Library of America series includes more than 300 volumes to date, authoritative editions that average 1,000 pages in length, feature cloth covers, sewn bindings, and ribbon markers, and are printed on premium acid-free paper that will last for centuries.

EZRA GREENSPAN is Edmund and Louise Kahn Chair in Humanities and professor of English at Southern Methodist University. He is the editor of William Wells Brown: A Reader and The Cambridge Companion to Walt Whitman and is completing a definitive biography of Brown for the bicentennial in 2014.